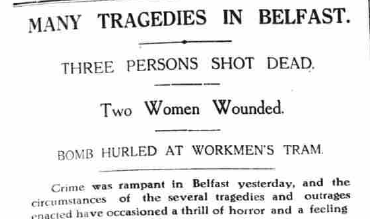 Violence continues on from yesterday's bombings in Belfast.

MANY TRAGEDIES IN BELFAST

Crime was rampant in Belfast yesterday, and the circumstances of the several tragedies and outrages enacted have occasioned a thrill of horror and a feeling of dismay in the City.

About 8 o'clock in the morning a man and his wife were shot dead at their own door and at 11 o'clock at night a woman who opened her door in response to a knock was also shot dead.

A third woman, who too, answered a knock, was seriously wounded in the breast, and a next door neighbour, also a woman, was shot in the arm and breast by bullets which came through the window or door of her home.

A savage attack by bomb and bullet was made at 7.50 a.m. on a tramcar containing 86 workers, including some women, at Ardoyne Junction, but the presence of mind of the driver saved he lives and limbs of the passengers.