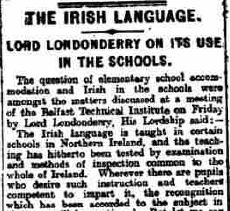 As Northern Ireland's first Minister for Education, Lord Londonderry played a pivotal role in shaping the future of schooling. Lord Londonderry wanted to create a non-denominational system with local education committees controlling schools rather than managers. Under section five of the Government of Ireland Act the state could not endow any religious body and as such the new system had to be non-denominational. Robert Lynn was instructed to set up a committee to explore the feasibility of these goals. The result of the Lynn Committee was the 1923 Education Act which passed into law on 2 June 1923. It created a county and regional system which could levy rates and administer schools which were fully controlled by the Ministry of Education. Here, Lord Londonderry firmly asserts the role of the Irish language in education for the North of Ireland.

LORD LONDONDERRY ON ITS USE IN THE SCHOOLS

The question of elementary school accommodation and Irish in the schools were amongst the matters discussed at a meeting of the Belfast Technical Institute on Friday by Lord Londonderry. His Lordship said:- The Irish Language is taught in certain schools in Northern Ireland, and the teaching has hitherto been tested by examination and methods of inspection common to the whole of Ireland. Wherever there are pupils who desire such instruction and teachers competent to impart it, the recognition which has been afforded to the subject in the past will be continued. But let me say at once that I would not be prepared to countenance any proposal containing directly or indirectly any element of compulsion on or under preference to pupil or teacher in regard to instruction in Irish.

The exact form of the questions to be set at the Intermediate Examinations in the history and geography sections of the English papers and in the honours papers in history and historical geography is still under discussion, but the questions will be in strict accordance with the published programme of the examination for 1922, and as your Minister of Education I will not for one moment allow the use of the so-called Irish language in the Intermediate Examinations for Northern Ireland in the answers to any papers except those set upon the Irish language as the subject of examination, nor will I sanction any divergence from the hitherto accepted scale of marking-by any divergence I mean such as that proposed in the South of Ireland, which gives an undue preponderence in favour of the narrow study of purely Irish history and Irish geography.