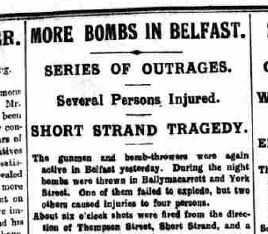 The gunmen and bomb-throwers were again active in Belfast yesterday. During the night bombs were thrown in Ballymacarrott and York Street. One of them failed to explode, but two others caused injuries to four persons. About six o'clock shots were fired from the direction of Thompson Street, Short Strand, and a man was fatally wounded. Three men made a raid on a spirit-grocery in India Street , and when they were pursued one of them jumped on to a tramcar, where he was seized by a passenger, and afterwards placed under arrest. He was carrying a loaded revolver.

Much shooting took place in the area of Thompson Street and Woodstock Road, as the result of which there was one casualty. The unfortunate person was D. Fryer, a man of 26 years, who resided at 59 McClure Street. He received a bullet wound in the abdomen, and died soon afterwards in the Royal Victoria Hospital. It appears that six shots were fired from the direction of Thompson Street and White Street early in the evening towards Woodstock Road. A couple of bullets glanced from the brickwork adjoining the Short Strand National School and spent themselves on the street. No damage was done, and the sniping ceased on the arrival of the military and police. Later, however, about 8.30, the sniping was resumed, and it was during this that Fryer fell victim. He appears to have been in Thompson Street when he was hit, and he ran in a dazed condition into Woodstock Road, where he fell exhausted. He was carried into a neighbouring shop, and from there he was then taken into hospital in the ambulance.

William Carroll, a boy of 15, residing at 11, Station Street, was wounded in the hip last evening when sitting on a tram which was passing the corner of Seaforde Street, on the Newtownards Road. He was in the top saloon at the time. He was afterwards removed to hospital.

Within half an hour of Curfew a bomb was thrown in the vicinity of Curtis Street (in the York Street district), causing injuries to two men and a boy. Their names are:- Richard Duff (22), 32 Lancaster Street, wound to the side. John McCann (22), 14 North Queen Street, wound to arm. Anthony Matthews (10), 15 Washington Street, wounds to leg. About seven o'clock a bomb was thrown into the street at Huddleston Place, off Seaforde Street, and Thomas Mullen, aged 14 of 47 Short Strand, was wounded. His injuries were caused by splinters in his head ad legs. A bomb which was thrown through the window of Mr. James Gyle's licensed premises at the corner of Short Strand, about half-past eight, failed to explode. Several shots were fired from the direction of Young's Row, off Newtownards Road, about 7.45, and the police returned the fire. No casualties were reported.