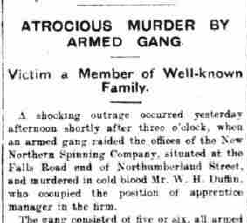 This week's violence in Belfast continues with deliberate armed attacks. On the 16 February, W. H. Duffin was brutally murdered at his place of work. A member of the well-known Duffin family and cousin of Adam Duffin, the popular Belfast public figure, motive for the murder remains unclear. His cousin, Adam, was one of those who reluctantly made common cause with former Conservative opponents to oppose home rule at all costs, and in June 1886 helped establish the Ulster Liberal Unionist Association. On 8 December 1887 he and many others from Belfast attended a huge gathering of prominent liberal unionists in Westminster Hall, London, and for the next thirty years he supported almost all the organisations set up to try to prevent home rule being introduced.

Victim a Member of Well-known Family

A shocking outrage occurred yesterday afternoon shortly after three o'clock, when an armed gang raided the office of the New Northern Spinning Company, situated at the Falls Road end of Northumberland Street, and murdered in cold blood Mr. W. H. Duffin, who occupied the position of apprentice manager in the firm.

The gang consisted of five or six, all armed with revolvers, and immediately on entering they fired a number of shots at Mr. Duffin, who was seated at his desk. A clerk, Mr. B. Gribben, who lives on the Woodvale Road, and who was also in the office at the time, was wounded, his arm being broken by a bullet. The gang fired a dozen or fifteen shots altogether, and Mr. Duffin received several bullet wounds. When the constabulary came on the scene the murderers had made good their escape. Mr Duffin's body was taken to the Royal Victoria Hospital. The deceased was a son of the late Mr Charles H. Duffin, a director of the Old Ulster Spinning Company, who retired from the business when the Falls Road branch of the Ulster was bought up by the New Northern Spinning Company. He was well known in the city as a linen manufacturer, and as honorary secretary of the Children's Hospital, Queen Street, a position he occupied with great benefit to the institution for many years. He was a prominent sportsman, shooting and fishing being favourite recreations. His wife (the mother of the deceased) was Miss Charley, sister of Mr. E. J. Charley, J.P., Dunmurry. The deceased was a cousin of Mr. Adam Duffin, J.P., LLD., the well-known Belfast stockbroker, who is a member of the Senate of Northern Ireland, and a high authority of educational affairs. Deceased was an only surviving son, his brother, Captain Frank Duffin, having been killed during the late war, Mr. Duffin lived with his mother and sister at Roselands, Andersonstown.