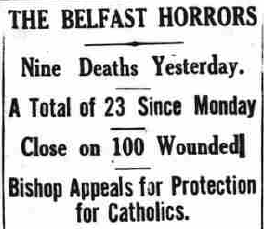 A Total of 23 Since Monday

Bishop Appeals for Protection for Catholics

There were nine deaths in Belfast up till midnight last night, making twenty-three since Monday, and almost one hundred persons have been wounded, many seriously. Fighting was renewed in Belfast yesterday, and up till mid-day three deaths were reported, and many persons were injured. A Carter, named Henry Gallagher, of Little Patrick Street, was shot dead in Great George St. by snipers. In the same thoroughfare George Harper, of Earl St., was shot dead. William Waring of Clifton St., succumbed to injuries received early in the morning. Eliza O'Hanlon one of the children wounded in the Weaver St. bomb outrage, died yesterday.

Following the shooting of Waring, who was caretaker of the Clifton Street Orange Hall, the district was in a highly violent state, and there was almost continuous firing, many house windows being shattered and doors riddled with bullets. The arrival of a large body of police enraged many and did not have the effect of stopping the shooting altogether. Gallagher was driving a horse and lorry down Great George St. when he was struck in the back with a bullet. He expired almost immediately.

There was heavy firing from Northumberland Street into Albert Street. Gunmen in the latter neighbourhood immediately retaliated. For some time there was a fierce shooting duel between the gunmen on either side. In the afternoon there was considerable shooting into Royal Avenue. Many windows were smashed. Large forces of military have been drafted into the city, and there are strong patrols on the streets. After their arrival matters calmed down, but there was occasional sniping. The following casualties were admitted last night to the Mater Hospital - John Wales (12), Enfield St., bullet wound in chest. John Keany, (28), Moor st., bullet wound in hip. Frank McHugh, same address, bullet wound in chest.

A shocking story is told of the murder of a youth named James Rice (19) of 20 Avondale St., Bloomfield district, who was carried into the Mater Hospital last night dead. The body was found in Ravenscroft St., beside his home, a residential district in the East End. The boys sister was informed, and went to the spot, where she was told by the neighbours, who are Protestants, that his hands had been tied behind has back when they found him. The body bears bullet marks and was bruised, while his head was battered in.

For the past few days Belfast again has given up to horrible lawlessness. Since Saturday about a dozen Catholics shot dead, some in their own homes, and over 50 wounded, several, it is feared, fatally. No adequate protection here for Catholics.Military urgently needed in the streets. Mr Joseph Devlin, M.P., has crossed to London, and will raise the question of the plight of Belfast Catholics on the first opportunity in the House of Commons.