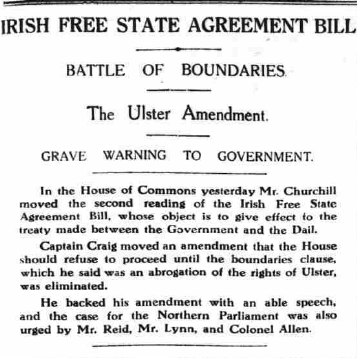 In the House of Commons yesterday Mr. Churchill moved the second reading of the Irish Free State Agreement Bill, whose object is to give effect to the treaty made between the Government and the Dáil. Captain Craig moved an amendment that the House should reuse to proceed until the boundaries clause, which said was an abrogation of the rights of Ulster, was eliminated. He backed his amendment with an able speech, and the case for the Northern Parliament was also urged by Mr. Reid, Mr. Lynn and colonel Allen.

Case for the Treaty

In the House of Commons yesterday, Mr. Churchill rose amid cheers to give the second reading of the Irish Free State Agreement Bill. He said:-The Bill gives effect to the treaty which both Houses of Parliament have already approved by large majorities. It clothes the Provisional Government with lawful power, and it enables them to hold an election under favourable conditions at the earliest moment. The importance and urgency of the objects are plain. Take, for instance, the object of clothing the Irish Provisional Government with law. Is it not fatal to peace, to social order, and to good government to have power wielded by men who have no legal authority? Every day it continues it is a reproach to the administration of the Empire. Every day it tends to bring into contempt those certain rules of procedure on the observance of which in every country the structure of civilised society depends.

THERE IS NO LAW

Only three days ago I spoke about some murderous criminals who had been caught by the Provisional Government in Southern Ireland accused of murdering and robbing a British Officer. I said that I presumed that they would be handed over to be dealt with, with the full rigour of the law. I was interrupted by an hon. friend who said:-"There is no law." This is perfectly true, but is it reasonable to take such interruptions, and not to support a bill which alone can clothe with law the action of the Irish Government? (Hear, hear). Unscathed by law yet recognised by the Crown and his Majesty's Ministers is an anomaly unprecedented in the history of the British Empire (Cheers and counter-cheers.) Its continuance one day longer than is necessary is derogatory to Parliament, the nation, and the Crown.

We must legalise and regularise our action. Contempt of Law is one of the great evils in many parts of the world at the present time, and it is disastrous to the Imperial Parliament to behave with countenance such a situation in Ireland one day longer than is absolutely necessary. Moreover, what chance does such a situation give to the Irish Executive which at the request of the King's representatives Ireland made, of course, on the advice of his Majesty's Government, has the very same burden and responsibility of directing Irish affairs? How can you expect such a Government to enforce respect for its devisions when any such decisions are absolutely unsanctioned by law? The Bill, in addition, will enable an election to be held in Ireland at an early date under favourable circumstances or the least un-favourable circumstances possible.