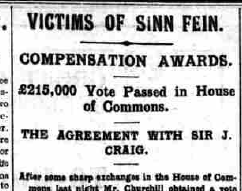 THE AGREEMENT WITH SIR J. CRAIG

After some sharp exchanges in the House of Commons last night Mr. Churchill obtained a vote of £215,000 in respect of the British victims of Sinn Féin violence in the South. An early statement is to be made in Parliament as to the arrangement entered into with Sir James Craig in respect of damage to property in Northern Ireland.

The House of Commons last night went into Committee of Supply on the Civil Service supplementary estimates. On a vote of £215,000 for compensation for criminal injuries and medical and nursing services to Crown employees who have been maliciously injured in Ireland. Mr. Churchill said the vote was needed for the purpose of dealing with the more pressing cases of personal injury to British people for whom the British Government was making itself responsible. These included the cases of widows who had been left unprovided for owing to their husbands having been murdered, and others, who had suffered previous injury and were now receiving medical attention.

Mr. J. H.Thomas (Lab.) said the difficulty in connection with the Mallow casualties seemed to be that neither side was going to accept the railwaymen's windows as victims, because these men were killed in the performance of their duties as railwaymen. One side said they were killed by the Black and Tans, and the other that the Republicans were responsible. Verdicts had been obtained in the courts for something like £7,000 or £8,000, but that money had not been paid. If Mr. Churchill would say these cases were included in the vote he would be satisfied. Mr. Churchill--The intentions of the Government are that they will be responsible for persons injured by the other side, and where these persons have got judgement non one is going to reopen that. I should have though that the railwaymen were certainly included. If they were on our side we shall accept responsibility for them, and shall accept the verdict of the Court in their favour, and either in part or in whole shall defray the cost out of the vote. Mr. Thomas - I want more than a formal statement. I want to know exactly what this means. Mr. Churchill said the fact that these people had got a verdict was presumptive evidence that they were law-abiding, and it was their business to defray the expenses.