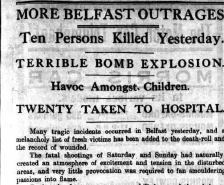 On the evening of February 13th, 1922, just after 8.30pm, two suspicious looking men were spotted by residents of Weaver Street in north Belfast, a small Catholic enclave surrounded by Protestant districts. Hurtling a bomb into the middle of a group of girls skipping, with the intention of maximising casualties, the ensuing explosion was heard all over Belfast. Shrapnel and lumps of metal flew in every direction and the bomb was then followed by a spray of bullets, preventing the parents from running to help their children. Four girls died; Ellen Johnstone (11) and Catherine Kennedy (15) died almost immediately; Elizabeth O’Hanlon (12) died the next day, and Rose-Anne McNeill (13) died on February 22nd. Many more suffered catastrophic injuries. Boys were injured too, as were adults. Two women subsequently died from their wounds, Maggie Smith (53) and Mary Owen (40). NI Prime minister James Craig cited the IRA kidnap of 40 loyalists in Tyrone and Fermanagh in early February in response to the arrest of players from the Monaghan Gaelic football team in Tyrone and the planned execution of three prisoners in Derry jail as the root cause of this deadly violence.

Many tragic incidents occurred in Belfast yesterday, and a melancholy list of fresh victims has been added to the death-toll and record of wounded.

The fatal shootings of Saturday and Sunday had natural created an atmosphere of excitement and tension in the disturbed areas, and very little provocation was required to fan smouldering passions into flame. During the day ten persons were killed, one of them being a child, who was stricken down in a bomb explosion in Weaver Street. Twenty more persons, mostly children, were injured by the explosion. From dusk until the curfew hour-now at eleven o'clock- heavy firing was heard all over the city, the frequent fusillades of revolver shots and rifle firing causing the utmost consternation. Patrols of military took up duty at night, and the streets became deserted, only an occasional shot being heard as the midnight hour approached. 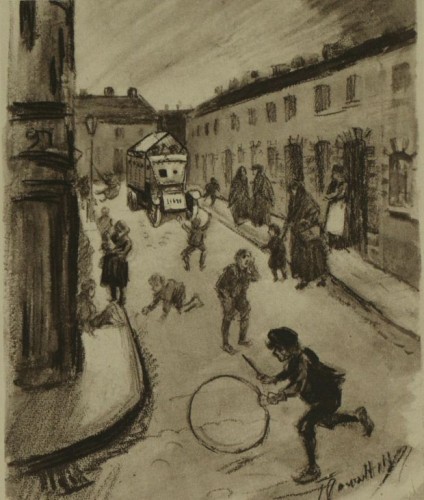