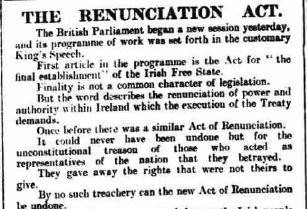 The Irish Free State (Agreement) Act 1922 passed on 31 March 1922. It gave the force of law to the Anglo-Irish Treaty, which was scheduled to the Act, and decreed that the British Government could by Orders in Council transfer powers to the Provisional Government of Southern Ireland. The Parliament of Southern Ireland would be dissolved within four months from the passing of the Act; and elections would be held for "the House of the Parliament" to which the Provisional Government would be responsible.

The British Parliament began a new session yesterday, and its programme of work was set forth in the customary King's Speech. First article in the programme is the Act for "the final establishment" of the Irish Free State. Finality is not a common character of legislation. But the word describes the renunciation of power an authority within Ireland which the execution of the Treaty demands. Once before there was a similar Act of Renunciation. It could never have been undone but for the unconstiutional treason of those who acted as representatives of the nation that they betrayed. They gave away the rights that were not theirs to give. By no such treachery can the new Act of Renunciation be undone. For the right and power now belong to the Irish people themselves, to guard and to preserve. Had Wolfe Tone secured the same guardianship, as he endeavoured to do, for the rights of the Free State in his day, we should have been spared several of the blood-stained chapters of modern Irish history.

The Westminster Speech says truly of the Irish Free State that its establishment "is anxiously awaited throughout the world." Not one of the nations risen to their freedom since 1918 has had such a welcome. The main object of Sinn Féin was to secure "the international recognition of Irish independence." As the constitution explains, the claim of the Republic was adopted as the symbol of the essential objects: Independence with international recognition. That recognition has anticipated the formal legalities of establishment.

Washington has recognised the Free State; Paris and Rome have followed suit; the League of Nations if already preparing the chair of Ireland's ambassador. The free latch-string of the assembly of the nations is in Ireland's hands. She will at once in Emmet's immortal phrase, "take her place among the nations of the world."

What Sinn Féin failed to win at Versailles will be given almost without the asking at Genoa. The sooner the formalities are fulfilled the better. there ought to be no delay. The Irish people cannot too soon have a Free Constitution to restore the freedom of civil life and set to work upon essential reforms. Once that freedom is in Ireland's possession it will never again be surrendered to any external power.