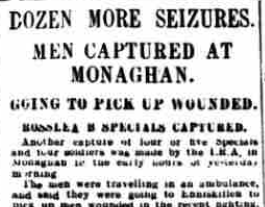 In mid-January 1922 the Monaghan football team was arrested on their way to play the Derry football team in the final of the Ulster Championship. On 7 February the IRA responded by kidnapping 42 prominent loyalists in Fermanagh and Tyrone and held them as hostages. A party of 18 armed B-Specials, when travelling by train to Enniskillen, were stopped at Clones railway station in Co Monaghan by an IRA group. In this news report, another B-Special kidnapping from this week is highlighted.

GOING TO PICK UP WOUNDED

Another capture of four of five Specials and four soldiers was made by the I.R.A in Monaghan in the early hours of yesterday morning. The men were travelling in an ambulance and said they were going to Enniskillen to pick up men wounded in the recent fighting. Monaghan town was occupied by large numbers of I.R.A and the car was immediately surrounded, and the men taken prisoners. They were held in the courthouse and removed later to an unknown destination. The official version of the affair is that the ambulance was going to Enniskillen to remove some wounded men. In the prevailing [...] the driver out his bearings and procured the assistance of a number of men as guides. These men directed the motor to Monaghan, where it arrived in the early hours of the morning. Here the ambulance was held up by the I.R.A and the occupants kidnapped. The car was then sent to Enniskillen, but up till the present still has not arrived at the destination.