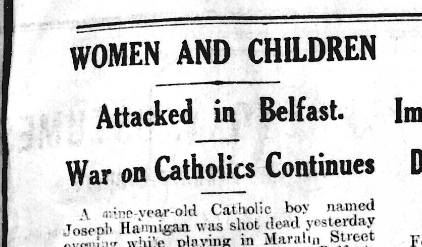 A nine year old Catholic boy named Joseph Hannigan was shot dead yesterday evening while playing in Maralin Street in the New Lodge area of Belfast. The district was quiet all day, and a crowd of children were playing in the thorough fare. Around 6.15 a single shot rang out, and the boy fell dead. The gunman was not observed.

A shot was fired through the window of the shop of Ethel Boal in Duncairn Gardens this afternoon, but no damage beyond the breaking of the glass was done. Three men walked into the shop of a jeweller named William Tully, in King Street, Belfast, at 4.30 yesterday evening. One of the men covered Tully with a revolver while the others seized rings, watches, and other articles of jewellery, and then escaped with the booty.

At five minutes to eleven last night a bomb was thrown from the back alley in the kitchen of a house , 154 Spamount Street. The missile exploded, and caused serious damages. Kathleen Heffernan, aged 50, was wounded in the head, abdomen, leg and chest, and her sister Agnes, aged 47, was wounded in the leg. Both women, who are Catholics, were taken to the Mater Hospital.