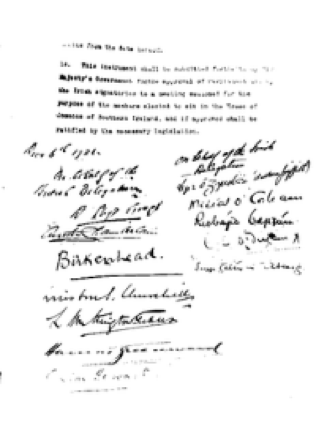 On 3 May 1921 Ireland was partitioned under the terms of the 1920 Government of Ireland Act. Elections to both the Northern Ireland and Southern Ireland parliaments were held later in the month.

Sinn Féin refused to recognise the Southern Ireland parliament and instead viewed the elections, held in the middle of the War of Independence, as a contest for the second Dáil Éireann. 124 Sinn Féin candidates were returned unopposed (the remaining four seats were taken by independent Unionists).

On 6 December 1921 the Anglo-Irish Treaty was signed by the British government and representatives of the Irish Republic. The Treaty brought to an end the Irish War of Independence and saw the 26 counties established as a self-governing dominion of the British Commonwealth, known as the Irish Free State. Under the terms of the Treaty, the Northern Ireland parliament was given the option to opt out of the new Free State, which it exercised in December 1922.

The 1925 report by the Boundary Commission, also set up as part of the Treaty, proposed to transfer small border areas with large minority populations between the two northern and southern states. Following protests from both Nationalists and Unionists in the wake of the report’s leaking in the press, the British, Irish, and Northern Irish governments all agreed to suppress its findings. The border established by the 1920 Government of Ireland Act therefore remained in place, and does so to this day.