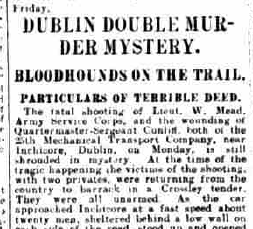 Violence from nationalist groups against police and military continued to rise steadily post-treaty, and reports from the House of Commons detail Mr. Churchill's examination that up until and including these murders, number of attacks on police since 6th December 1921 was 82, and upon military 34. Churchill dismissed claims from other members of parliament who argued that this violence was reaching fever-pitch, demanding intervention from the British military, and suggested that 'it only shows that we must persevere steadily in our policy'.

BLOODHOUNDS ON THE TRAIL

The fatal shooting of Lieut. W. Mead. Army Service Corps, and the wounding of Quartermaster-Sergeant Connolly, both of the 25th Mechanical Transport Company, near Inchicore, Dublin, on Monday, is still shrouded in mystery. At the time of the tragic happening the victims of the shooting with two privates, were returning from the country to barrack in a Crossley tender. They were all unarmed. As the car approached Inchicore at a fast speed about twenty men, sheltered behind a low wall on each side of the road, stood up and opened fire with rifles and revolvers. Lieut. Mead was shot through the heart and dropped dead immediately, whilst the quartermaster-sergeant collapsed from a dangerous wound in the side. The driver of the tender drove straight to King George V hospital where the wounded sergeant had his injuries dressed, but his condition was hopeless, and he died some hours later.

The ambush took place at 2 p.m. within 200 years of the suburban tram terminus. Two Army Service Corps men, who were sheltering at an area of the Camac River, Inchicore, where their lorry broke down two hours previously, heard shots and looking up the road, saw a military tender drive into sight. At first the vehicle was proceeding slowly, but it suddenly put up a great speed. This was obviously the time when Lieutenant Mead was killed, and the observing A.S.C. men rushed away to safety, and when they returned they found that their lorry was in flames.

The occurrence caused great consternation. Shortly after the shooting a fleet of motor lorries and cars left Dublin, bringing both British and I.R.A officers to the scene. The flames on the broken down lorry were extinguished and what remained of it was towed into town. Every road near Inchicore was watched and every passenger scrutinised and no effort spared to track down the perpertrators of the outrage. A couple of blood hounds were utilised by the military and are on the trail of the attackers. Parties of soldiers on foot with rifles, bayonets and trench helmets toured the district in extended formation, but up till now no arrests have been made. The deceased officer had been out in pursuance of his duty, which was the settlement of claims against the military for damage to land, etc. He had been out to see a farm cart which had been damaged by a motor lorry. He never made cash payments, but merely reported on the merits of the case, so that there is no foundation for the suggestion that robbery was the motive for this outrage.