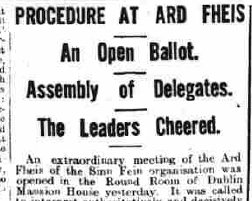 An extraordinary meeting of the Art Fheis of the Sinn Féin organisation was opened in the Round Room of Dublin Mansion House yesterday. It was called to interpret authoritatively and decisively the constitutions of the organisation, with special reference to the situation created by the signing of articles of agreement in London, and their approval by Dáil Éireann, so as to decide the policy of the organisation in view of the possible forth-coming election.

As early ad ten o'clock Dawson Street was crowded with delegates from all quarters of the country. Lined up in queues they passed into the Mansion House in a steady stream for more than an hour. As they awaited their turn to pass the steward, one noticed the delegates were drawn from all classes of the community- priests and laymen, townsmen and countrymen, young and old were all alike represented in, perhaps, the biggest concourse of the kind that ever assembled in the Irish capital. There was a fair attendance of women delegates, and it was interesting to notice a larger attendance of the older generation than one usually sees at latter day political gatherings.

As the long files of delegates were passing mechanically into the Mansion House, rival distributors of handbills for and against the Treaty were busy distributing their leaflets of advice and appeal. For the most part they were read without comment. The delegates, however, conversed eagerly among themselves on the issues before them. In some quarters one heard some hopes of unity expressed, but common to all the delegates was an atmosphere of serious calm and terse if quiet expectancy. By 11 o'clock the Round Room was packed to overflowing. The galleries and the semi-circular [...] that speeds out from the Lord Mayor's chair around a great portion of the Hall were crowded to the utmost capacity, while a glance across the floor revealed a sea of faces. At 11.20 Mr. de Valera entered amidst the applause and cheers of his supporters, and here one noticed for the first time, a new note in Irish gatherings, for while Mr. de Valera's supporters' applauded, a considerable number of delegates refrained from making any demonstration. Mr de Valera occupied the Lord Mayor's chair, Mr. Stack sitting on his right and Mr. Boland on the left. Mr. de Valera immediately opened the proceedings and inaugurated a discussion of procedure. Mr. Geo Murnaghan (Omagh) proposed that the voting on the main resolution be by ballot, as previously arranged by the Standing Committee. Mr. W. L. Cole seconded the resolution, and during his brief speech the second cheer of the morning announced the arrival of Mr. Arthur Griffith and Mr. Michael Collins.

As they mounted the platform their supporters cheered again. This time Mr. de Valera 's friends remained silent. At the outset Mr. de Valera stated the manner under which the principal resolution and amendment would be decided. The Standing Committee had recommended that the decision to be taken by ballot card, as at an election. They would have to consider whether they would have open voting or whether they would decide on voting by card. Mr Austin Stack, who was a member of the De Valera Cabinet, proposed as an amendment that the voting be open. The reasons, he said, given for the other arrangement were that it would be inconvenient, but that delegates there would be acting under duress in many cases. He claimed in that atmosphere there would be very little fear that any would act under duress. He thought no delegate had any right to come there representing the majority of a certain branch unless he intended to record his vote in accordance with their wishes.

Mr.T. P. McKesten (East Cavan) spoke in favour of the revolution and said he thought it was in the minds of all the delegates to carry out the pledges they gave to their branches.

Mr. Archibald Savage (Belfast) supported the amendment, and said that if the most important business was done in secret, the clubs would have no opportunity of criticising the action of the delegates when they came home. Mr. D. McCulough (Belfast) moved that the question be now put.

Mr. de Valera put the amendment first, and a show of hands declared it carried. This decision was challenged by Mr. Michael Collins, but, after further discussion, it was agreed that the voting should be open by having the name and branch of every voter on the ballot paper. A long discussion took place on the question of the time at which voting should take place on the principal resolution. Mr Etchingham (Wexford), who held office under Mr. de Valera, urged that there was no reason why they should hurry their decision, and that the discussion should extend over two days if necessary. A proposition was made that the closure on speakers should operate at six o'clock, and the vote be then taken.

Mr. Seán McEntee, Belfast and Monaghan, opposing this motion, said the organisation was going to take the most important decision that had been before it since 1917. He thought the question should be fully discussed, and that there should be no closure, s suggested, they might as well vote immediately, but he thought they could not discharged their duty to the nation if they voted immediately. There were two sides to every question. (A Voice-"The country wants work now, not talk!") Continuing, Mr. McEntee said it was always bad to come to a decision without due deliberation and discussion. A delegate claimed that Mr. McEntee's speech was out of order. Mr. Kevin O'Shiel proposed that, in accordance with the suggestion of Mr. McEntee, the vote should be taken without discussion. They were heart sick of all this talking. Those who supported the Treaty did so because they thought it was the best for Ireland, and those who opposed it did so for the same reason. He formally proposed that the resolution be put without discussion. Mr Seán McEntee said this was not his suggestion. On a show of hand the proposal was declared lost. After further discussion, it was agreed that at seven o'clock the question of closure to be considered.