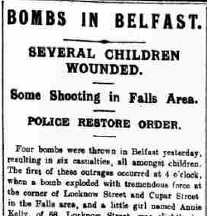 Although the Anglo-Irish Treaty began to resolve much of the violent conflict which had plagued Belfast since 1920, some factions continued to persist in pogrom violence. This article highlights the chaotic and frenzied nature of attacks across the city.

Some Shooting in Falls Area

Four bombs were thrown in Belfast yesterday, resulting in six casualties, all amongst children. The first of these outrages occurred at 4 o'clock, when a bomb exploded with tremendous force at the corner of Lucknow Street and Cupar Street in the Falls area, and a little girl named Annie Kelly, of 68, Locknow Street, was slightly injured by the flying splinters. Fortunately very few people were about at the time, otherwise the results would probably have been more serious. Many windows of houses in the vicinity were shattered. Some shooting took place in the district afterwards but the arrival of the police restored order.

BOMBS IN BACK YARD

The third bombing attack took place about the same time in Bombay Street, which runs along Kashmir Road to Clonard Gardens. On this occasion two bombs were thrown into the back yard of No. 59, occupied by a man named Jospeh Bannon. One of the bombs was defective and failed to go off, but the second exploded with a loud detonation, causing considerable alarm in the neighbourhood. The windows at the back of the house were smashed, but fortunately no one was injured.