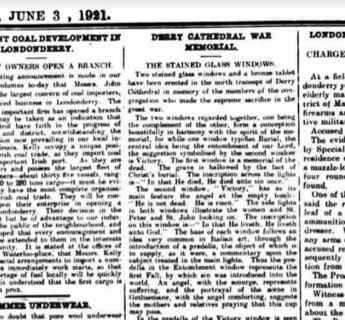 On 30 June 1920, the Londonderry Sentinel reported the erection of two stained glass windows and a bronze plaque at St. Columb’s, the city’s Church of Ireland cathedral. The plaque included the names of members of the congregation who died during the First World War, serving regiments such as the Royal Engineers, the Royal Inniskilling Fusiliers and the Irish Guards. Two stained glass windows and a bronze tablet have been erected in the north transept of Derry Cathedral in memory of the members of the congregation who made the supreme sacrifice in the great war.

The two windows regarded together, one being the complement of the other, form a conception beautifully in harmony with the spirit of the memorial, for while one window typifies Burial, the central idea being the entombment of our Lord, the suggestion symbolised by the second window is Victory. The first window is a memorial of the dead. The grave is hallowed by the fact of Christ’s burial. The inscription across the lights is— “In that He died, He died unto sin once.”

The second window, “Victory,” has as its main feature the angel at the empty tomb: “He is not dead. He is risen.” The side lights in both windows illustrate the women and St. Peter and St. John looking on. The inscription on this window is— “In that He liveth, He liveth unto God.” The base of each window follows an idea very common in Italian art, through the introduction of a predella, the object of which is to supply, as it were, a commentary upon the subject treated in the main lights. Thus the predella in the Entombment window represents the first Fall, by which sin was introduced into the world. An angel, with the scourge, represents suffering, and the portrayal of the scene in Gethsemane, with the angel comforting, suggests the mothers and relatives praying that this cup may pass…

The tablet containing the names of members of the congregation who fell in the war is of bronze and occupies a position between the memorial windows. The intention is to complete the memorial by encircling the windows and tablet with a suitable surrounding.

The inscription on the tablet is—“To the glory of God, and in thankful remembrance of all the loyal men connected with Derry Cathedral who, not counting their lives dear unto them, went out to fight for us in the great war, 1914–1918. Remember especially the loved ones whose names are recorded here who were themselves called into the larger life.” Then follow the names of the fallen …