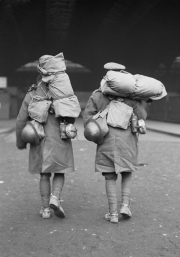 A chain of events brought the Central Powers, led by the German Empire and Austria-Hungary, to war with the Éntente, led by Britain, France and Russia. A localised conflict in south western Europe between Austria-Hungary and Serbia quickly escalated into European and then global conflict.

Britain officially became involved in early August, 1914. The British government could not avoid becoming entangled in the conflict due to her commitments to France and Russia. In August and September 1914 ‘war fever’ gripped large numbers of people, who mistakenly believed the fighting would be over before Christmas.

The looming civil war in Ireland was replaced by a new battle as Protestants and Catholics, from all over Ireland, enlisted in the British Army. Members of the two paramilitary forces in Ireland, the Ulster Volunteer Force (UVF) and the Irish Volunteers, enlisted to fight for Britain.

Politicians tried to use their respective stances on the Home Rule question to encourage their followers to join up. Edward Carson, the Unionist leader, believed that Protestants and Unionists could demonstrate their loyalty to Britain in the hope of defeating Home Rule. Irish Nationalists, spurred on by Irish Parliamentary Party Leader John Redmond, believed they could show their loyalty to Britain and have Home Rule enforced.

In the end, Ireland’s two militias accounted for less than half of the total number of volunteers: 24,000 recruits were drawn from the National Volunteers and 26,000 from the Ulster Volunteers. Irish involvement in the war would become largely associated with the 36th (Ulster) Division’s participation in the Battle of the Somme on 1 July 1916.