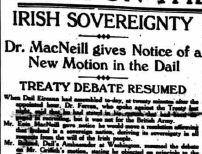 After a passionate 3 weeks of debate in the temporary location at the Council Chamber of University College Dublin in Earlsfort Terrace, the Anglo-Irish Treaty was ratified by the Dáil with 64 to 57 votes in favour. Reports from earlier in the day highlight the tempestuous attitudes amongst elected TD's, a somewhat foreshadow of the immediate split within Republican government to follow.

Dr. MacNeill gives Notice of a New Motion in the Dáil

When Dáil Éireann had assembled today, at twenty minutes after the appointed hour, Dr. Ferran, who spoke against the Treaty last night, said that he had stated in his speech that [...] but it was not for the British Army.

Mr. Eoin MacNeill gave notice he would move a resolution affirming that Ireland is a sovereign nation, deriving its sovereignty in all respects from the will of the Irish people.

Mr. Boland, Dáil's Ambassador at Washington, resumed the debate on Mr. Griffith's motion, stating he objected on principle to the Treaty, because he was asked to surrender the title of Irishman and accept the title of West Briton.

Mr. Joseph McGrath, Dublin, supported the Treaty and said that it enabled them to carry out everything in the democratic programme adopted by Dáil Éireann. The alternative proposal did not give the Republic that he had fought and worked for.

The debate was continued by Count O'Byrne, who opposed the Treaty, and by Mr. Patrick Brennan, another Commandant from Co. Clare, who supported it.

Mr. P. O'Keece, Cork, also supported the Treaty. He said the Republic was not dead, it was in the distance. He did not think the will of the people counted now. He was afraid another weapon would be used to stifle it.

It is understood that only two more private members and Mr. Cathal Brugha and mr. Arthur Griffith will speak after luncheon. The debate was adjourned at 1.30 till 4 o'clock. The vote is expected to be taken about 6 o'clock.

Mrs. O'Callaghan rose at the end of Mr. Sean Nolan's speech, and was understood to say that several men had spoken for the army, and she noticed everyone one of them used three or four arguments in practically the same words. Supposed to speak for the army, they were either right or wrong.

This remark brought up Mr. Sean McKeon, who said each and every officer of the army was bound to say the same. Mr. Mulachy also sprang to his feet and asked was he in order, when Mr. De Valera said the Minister of Defence would be present later, and the matter could be raised.