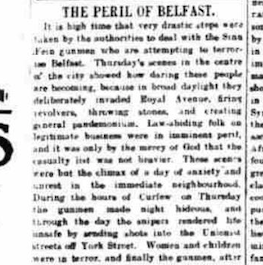 On 15 July, an editorial in the Belfast Telegraph responded to the increase in violence following the agreement of a truce in the Irish War of Independence. In the newspaper’s view, Sinn Féin was largely responsible for recent incidents and Loyalists had been unfairly maligned in the British press. The author concluded that the ‘public will look to the authorities to deal severely with further disturbances, and to afford adequate protection to life and property. If they do so order will soon be restored’.

The Peril of Belfast

It is high time that very drastic steps were taken by the authorities to deal with the Sinn Fein gunmen who are attempting to terrorise Belfast. Thursday’s scenes in the centre of the city showed how daring these people are becoming, because in broad daylight they deliberately invaded Royal Avenue, firing revolvers, throwing stones, and creating general pandemonium. Law-abiding folk on legitimate business were in imminent peril, and it was only by the mercy of God that the casualty list was not heavier. These scenes were but the climax of a day of anxiety and unrest in the immediate neighbourhood. During the hours of Curfew on Thursday the gunmen made night hideous, and through the day the snipers rendered life unsafe by sending shots into the Unionist streets off York Street. Women and children were in terror, and final the gunmen, after wounding several persons, took the life of a young Protestant girl at the corner of Nile Street. Two or three hours later Mr. W. Grant, M.P., one of our most respected citizens, who with Mr. Thompson Donald, M.P., had been doing his best to pacify the affrighted people, was shot while proceeding to look for military protection for the Loyalists.

The reckless manner in which rifles and revolvers were used by the gunmen has created a feeling of irritation, and it is not surprising that with the limited means at their disposal Loyalists did their best to protect themselves. There appears to be no limit to the supply of ammunition on the rebel side, and frankly we do not see much prospect of peace till these gunmen are rooted out. The whole business looked suspiciously like a plot to discredit Belfast and Ulster at this juncture. There is a tendency amongst many English people, largely the results of the lying reports in anti-Ulster papers in London and elsewhere, to believe that everything that happens in Belfast must be put down to the Unionists…