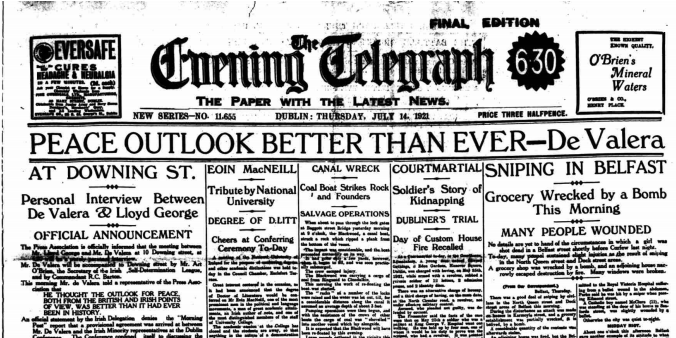 On the same day that Éamon de Valera led a Sinn Féin delegation to London for talks with David Lloyd George, the Dublin Evening Telegraph reported on violent incidents in the North Queen Street and Dock Street areas of Belfast. On the previous evening a young girl was accidentally shot dead on Balkan Street, located in the Falls Road area of west Belfast.

No details are yet to hand of the circumstances in which a girl was shot dead on a Belfast street shortly before Curfew last night.

Today, many people sustained slight injuries as the result of sniping in the North Queen street and Dock Street areas.

A grocery shop was wrecked by a bomb, and an adjoining house narrowly escaped destruction by fire. Many windows were broken…

There was a good deal of sniping by civilians in the North Queen street and Dock street areas of Belfast this morning.

During the disturbances an attack was made on houses in Karmoyle street, and a grocery establishment was partially wrecked, it is believed, by a bomb.

A considerable quantity of the contents was afterwards stolen.

An adjoining house was fired, but the Brigade extinguished the flames before much damage was done.

Many windows in the district were smashed.

A number of people were slightly injured as the result of revolver firing, but none were removed to hospital.

A large force of police succeeded in restoring order.