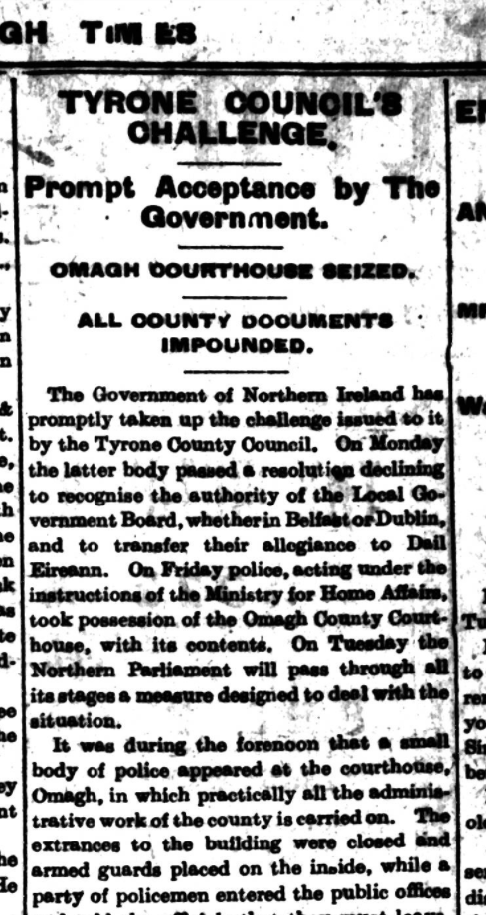 On 28 November, Tyrone County Council declared it would not be administered by either of the British-endorsed political bodies on the island of Ireland. Instead, Tyrone County Council announced that it owed its allegiance to Dáil Éireann. This challenge to the Northern Ireland government was met with force four days later, when members of the RIC (now under the jurisdiction of the Northern Ireland Ministry of Home Affairs) took possession of the Omagh County Courthouse, as recounted in this edition of the Fermanagh Times.

Prompt Acceptance by The Government

The Government of Northern Ireland has promptly taken up the challenge issued to it by the Tyrone County Council. On Monday the latter body passed a resolution declining to recognise the authority of the Local Government Board, whether in Belfast or Dublin, and to transfer their allegiance to Dail Eireann. On Friday police, acting under the instructions of the Ministry of Home Affairs, took possession of the Omagh County Courthouse, with its contents. On Tuesday the Northern Parliament will pass through all its stages a measure designed to deal with the situation.

It was during the forenoon that a small body of police appeared at the courthouse, Omagh, in which practically all the administrative work of the county is carried on. The entrances to the building were closed and armed guards placed on the inside, while a party of policemen entered the public offices and told the officials that they must leave. The offices of the County Council, the County Surveyor, and the Committee of Agriculture were duly visited and all work brought to a termination, the only offices not interfered with being those of Mr. James Toner (clerk of the Crown and Peace), and the Land Registry Office, and the office of Colonel H. Irvine, C.B.

The other officials filed out of the building and were not permitted to remove other books or papers.

It is understood that the occupation of the Courthouse has been carried out by the authorities to prevent the Tyrone County Council carrying out the resolution of Monday last, and to prevent any correspondence between the Council and Dail Eireann. It will be recollected that the County Council asked Dail Eireann to send down an “inspector” to advise them as to the best means of extricating themselves from their present position, as their accounts are already £24,000 to the bad and they owe the subsidiary bodies £37,000.

The promptitude with which the Home Office has dealt with the situation has given great satisfaction to the loyalist section of the community, which is also the chief rate-paying community, and has watched with apprehension the gradual impoverishment of the district under Sinn Fein auspices.

The action of the Council in pledging allegiance to Dail Eireann and severing connection with the Local Government Board has in itself forfeited Government grants of approximately £50,0000 or £55,000. The rates to be collected would not meet the instalments due to the County Asylum, Hospital, Sanatorium, Technical Committee, and to the various Boards of Guardians and Rural Councils, and no provision whatever can be made for road maintenance. The Council as already stated, has a deficit of over £24,000, and, in addition, owes over £37,000 to the subsidiary bodies, making a total deficit of £61,000. The grants to the Council amounted to £25,000.

One of the first results of the Council action has been the issue of notices to the gangers and men employed on the road, terminating their employment, and it will be interesting to study the attitude of these men, nine-tenths of whom are Nationalists, and who now, in consequence of the action o their political friends, find themselves unemployed at the beginning of the winter months. 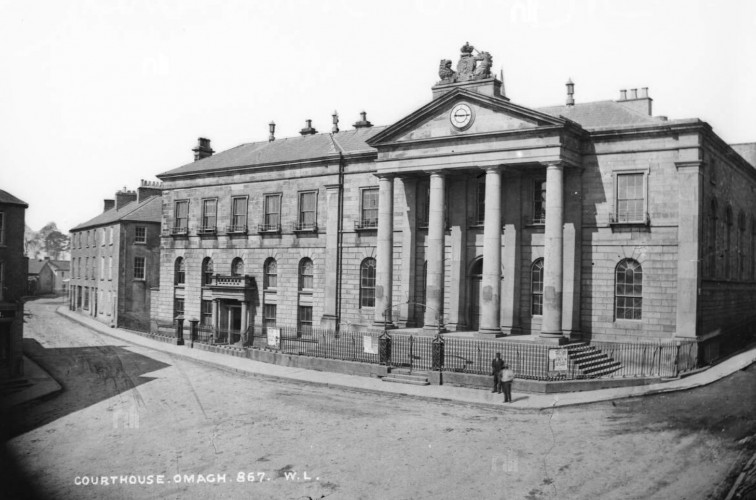