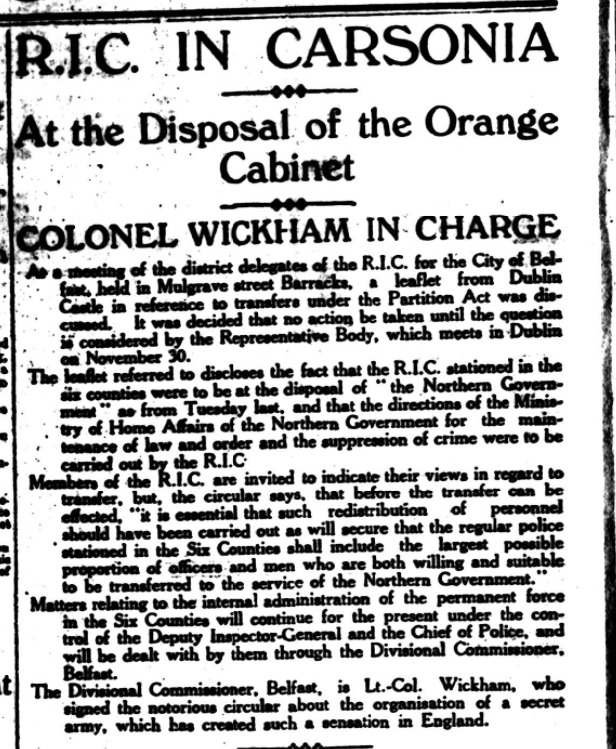 The reference towards the end of the article to “the notorious circular” refers to a note obtained by the Irish Bulletin, which detailed how the Northern Ireland government would have the power to recruit a local auxiliary service in emergency circumstances.

At the Disposal of the Orange Cabinet

At a meeting of the district delegates of the R.I.C. for the City of Belfast, held in Mulgrave street Barracks, a leaflet from Dublin Castle in reference to transfers under the Partition Act was discussed. It was decided that no action be taken until the question is considered by the Representative Body, which meets in Dublin on November 30.

The leaflet referred to discloses the fact that the R.I.C. stationed in the six counties were to be at the disposal of “the Northern Government” as from Tuesday last, and that the directions of the Ministry of Home Affairs of the Northern Government for the maintenance of law and order and the suppression of crime were to be carried out by the R.I.C.

Members of the R.I.C. are invited to indicate their views in regard to transfer, but, the circular says, that before the transfer can be effected, “it is essential that such redistribution of personnel should have been carried out as will secure that the regular police stationed in the Six Counties shall include the largest possible proportion of officers and men who are both willing and suitable to be transferred to the service of the Northern Government.”

Matters relating to the internal administration of the permanent force in the Six Counties will continue for the present under the control of the Deputy Inspector-General and the Chief of Police, and will be dealt with by them through the Divisional Commission, Belfast.

The Divisional Commissioner, Belfast, is Lt.-Col Wickham, who signed the notorious circular about the organisation of a secret army, which has created such a sensation in England.