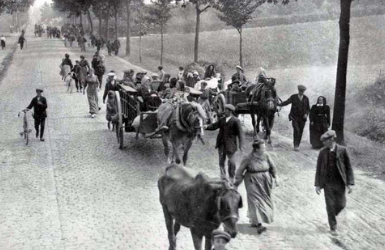 On 18 April 1921 Hortense de Meulemeester was awarded the Order of the Crown, the second-highest Belgian Order of Knighthood, by King Albert I. Originally from Flanders but by then living in Holywood, Co. Down, De Meulemeester had initially moved to the north of Ireland in 1898 when her husband Arthur was appointed as the organist and choir conductor at Belfast’s Clonard monastery. She was honoured for her role supporting Belgian soldiers and refugees living in Ulster during the First World War. 250,000 Belgian refugees arrived in the UK during the war, with some living in purpose-built villages with their own schools, shops, and currency. Due to fears surrounding sea crossings during war time, the number of Belgian refugees in Ireland was comparatively smaller than the rest of the UK, with 3,000 arriving on the island from 1914. They were supported and housed by local volunteers and members of Ireland’s pre-war Belgian community such as the De Meulemeesters, and contributed to the local society and economy, most notably through the establishment of a lingerie factory in Monaghan town.

The many friends of Monsiour and Madame de Meulemeester will be delighted to learn that the King of the Belgians has been pleased to confer on Madame de Meulemeester “l’Ordre de la Couronne avec Palme d’Or” (the Order of the Crown with Golden Palm) for her noble and splendid work, rendered to her fellow-countrymen during the great war. Many members of the Belfast population will remember how prominently Madame de Meulemeester was associated with all the great undertakings on behalf of the sufferers of her country. The Belgian soldiers and the numerous refugees in the North of Ireland at all times found in her a staunch friend who was untiring in her efforts to bring them comfort and relief. Hence the honour bestowed upon her – almost the highest which her country can give – is well deserved.