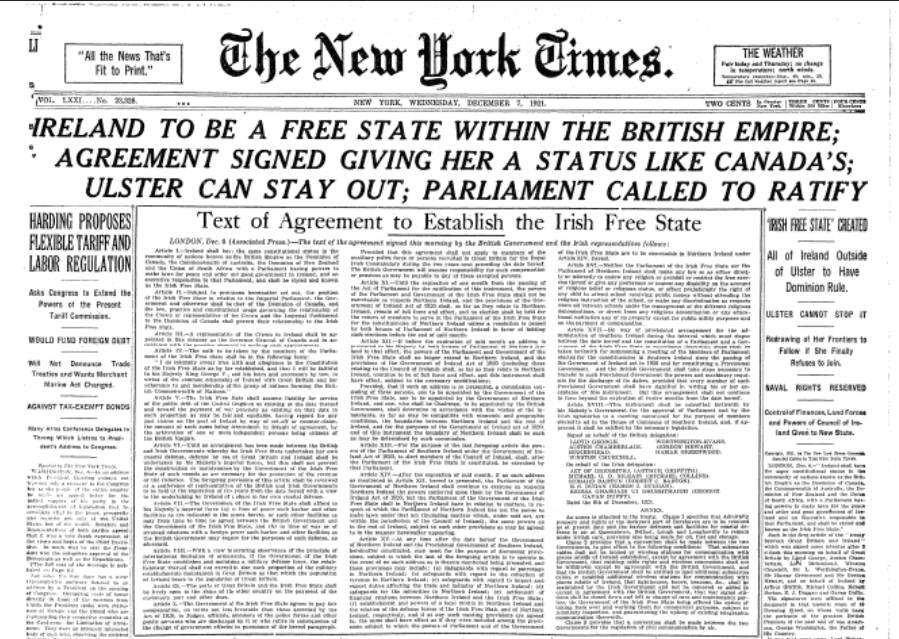 The British Government published the terms of the Anglo-Irish Treaty on the night of 6 December, but these did not appear in newsprint until the following day. Given the importance of the document, the majority of major international papers ran the story. The New York Times reproduced the entire text of the Anglo-Irish Treaty on its front page on 7 December. This extract highlights the position of the new Irish Free State within the British Empire and shows the text of the controversial oath to be taken by all members of the new parliament.

IRELAND TO BE A FREE STATE WITHIN THE BRITISH EMPIRE;

ULSTER CAN STAY OUT; PARLIAMENT CALLED TO RATIFY

Text of Agreement to Establish the Irish Free State

Article I.- Ireland shall have the same constitutional status in the community of nations known as the British Empire as the Dominion of Canada, the Commonwealth of Australia, the Dominion of New Zealand and the Union of South Africa, with a Parliament having powers to make laws for peace and order and good government of Ireland, and an executive responsible to that Parliament, and shall be styled and known as the Irish Free State.

Article II.- Subject to the provisions hereinafter set out, the position of the Irish Free State in relation to the Imperial Parliament, the Government and otherwise shall be that of the Dominion of Canada, and the law, practice and constitutional usage governing the relationship of the Crown or the representative of the Crown and the Imperial Parliament to the Dominion of Canada shall govern their relationship to the Irish Free State.

Article III.- A representative of the Crown in Ireland shall be appointed in like manner as the Governor-General of Canada and in accordance with the practice observed in making such appointments.

Article IV.- The oath to be taken by all the members of the Parliament of the Irish Free State shall be in the following form:

“I do solemnly swear true faith and allegiance to the Constitution of the Irish Free State as by law established and that I will be faithful to his Majesty King George V., his heirs and successors by law, in virtue of the common citizenship of Ireland with Great Britain and her adherence to and membership of the group of nations forming the British Commonwealth of Nations.”