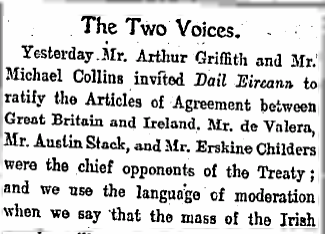 The Irish Times was a unionist newspaper in the early 1920s but increasingly recognised the emerging reality of Irish independence of some kind. It was from this vantage point that this editorial, published on 20 December 1921, endorsed what it perceived to be the more moderate position of the pro-treaty delegates. It also provided some choice words for the "finicking idealism" of Éamon de Valera. The French phrase "Plus ca change, plus c'est la méme chose", referenced towards the end of the article, can be translated as "The more it changes, the more it's the same thing."

Yesterday Mr. Arthur Griffith and Mr. Michael Collins invited Dail Eireann to ratify the Articles of Agreement between Great Britain and Ireland, Mr. de Valera, Mr. Austin Stack, and Mr. Erskine Childers were the chief opponents of the Treaty; and we use the language of moderation when we say that the mass of the Irish people will read their speeches with mingled feelings of anger and despair. If they are to have their way, the hunt for the chimera of absolute independence is about to be renewed. It was always hopeless, but – if there are degrees of hopelessness – its renewal will be the most hopeless adventure for which a people ever sacrificed their peace and the blood of their young men. Until Great Britain made her astonishingly generous offer to Ireland the Sinn Fein movement enjoyed a large measure of foreign sympathy – not as a Republican movement, but as a struggle for the just and reasonable rights of nationhood. All those rights are now Ireland's, to take or reject. None of the hostile arguments yesterday was able to discredit the Treaty as a real concession to this country of all, and more than all, for which her sons have striven through seven hundred years. Ireland is now a nation without any grievance that could induce any other nation to lift a finder or contribute a sixpence in her defence. The world applauds the British Empire's greatest act of Imperial magnanimity. It judges Britain to be wholly in the right, and will judge Ireland, if she rejects the Treaty, to be wholly in the wrong. Yet for the sake of an impossible ideal – indeed, as it seems, for the sake of a mere quibble – Mr. de Valera and his supporters are ready to drag Ireland down from the topmost pinnacle of hope fulfilled into the old slough of misery and despond.

We shall not analyse the speeches to which the Dail listened yesterday. The country will decide for itself between the sane realism of Messrs. Griffith and Collins and the finicking idealism of Messrs. De Valera and Childers. Indeed, we believe, with Mr. Griffith, that the country decided on the day when the Articles were published, and that ninety-five per cent. of the Irish people desire most earnestly and immediate ratification of the settlement. To-day we are more concerned to remind Dail Eireann of its heavy responsibilities. It is an elected assembly and the nation looks to it for a clear expression of the popular will. If it appreciates that duty, it will ratify the Agreement without delay; and the country expects from it such a ratification as will enable an immediate beginning to be made with the establishment of the Irish Free State. If the Dail rejects the Agreement, the last word will not have been said; for the nation will insist upon a controlling voice in the settlement of its destinies. It was hinted in some of yesterday's speeches that a middle course may be proposed – that the Dail may be asked to modify the Agreement in a manner which would leave Ireland half within, and half without, the British Empire. That would be an utterly undemocratic course; for, unline definite rejection, it would take the final decision out of the hands of the Irish people. Moreover, it could be supported only by men who wished to wreck the Agreement and to deprive Ireland of everything that the plenipotentiaries won for her at Downing street. If the Agreement is amended in Dublin, the right of further amendment cannot be denied to Westminster, and there can be no doubt that it will be exercised. Is the Dail prepared to accept that risk?

The goal of every member of Dail Eireann is a united Ireland; but yesterday's discussions have not served the cause of a united Ireland. Some of the speeches will disappoint and alarm the loyalist minority in the South and West. They have accepted the Agreement as a final declaration of peace between Great Britain and Ireland. They were encouraged to put their fears and prejudices behind them by the hope that the Irish Free State would settle down to the task of making this country a peaceful and progressive partner in the community of the Empire. Are they to learn now that, even if the Agreement is ratified by a small majority, a section of Irishmen will refuse to be bound by it? They expect a constitutional Opposition in the Irish Free State, as in all free States; but are the first workings of our own infant State to be harried by the hostility of an unconstitutional Opposition? Is the dreary maxim, Plus ca change, plus c'est la méme chose, to be true of the new Ireland with her Canadian status? Again, Ireland will not be Ireland without Ulster. Will Ulster's misgivings be abated by the menace of an unappeased sentiment of hostility to the Imperial allegiance in an Ireland from which the last remnant of the Imperial forces will have been withdrawn? The Dail must ratify the Agreement, but the mere ratification must prove that Mr. Griffith, not Mr. de Valera, is the authentic spokesman of the Irish people.