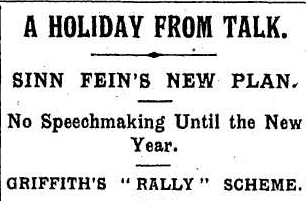 As the South of Ireland reels from the implementation of the Anglo-Irish Treaty, Sinn Féin agree to halt speechmaking until policy-makers and politicians meet again in the New Year.

A HOLIDAY FROM TALK

No Speechmaking Until the New Year

There is to be another "truce" in Ireland - a truce to talk. In other words, the Sinn Féin M.P.'s- a general exodus of whom began from Dublin yesterday, and whose oratory during the past week or two has let in a flood of light on the rebel attitude-have agreed to abstain from speech-making during the Christmas holidays, and until the floodgates are re-opened at Earlsfort Terrace, Dublin, on 3rd January.

During the interval however, there may be a spate of resolution-passing, and an effort is to be made by the Griffith faction and those who sympathise with them in Southern Ireland, to work up a public campaign in favour of the "Treaty". Resolutions have already been passed to this effect in Carlow and by the County Council of Clare, and these have been seized on by the pro - "Treaty" groups in Southern Ireland to urge similar steps.

Thus, the "Irish Times", the organ of the Midleton Group, declared that the week ending Tuesday, 3rd January should be regarded as "Treaty Week", during which time all public organisations should call special meetings to demand the ratification of the Treaty and forward their resolutions to the various members who represent them in the Dáil.

Commenting on the agreement that there shall be no speech-making by the Sinn Fein M.P.'s during the holidays, the special correspondent in Dublin of the Press Association says it is felt there that the period of silence will give some of the members opportunity for sober reflection on the attitude they had adopted and proclaimed with such passion; and, further, that it will help them to realise the necessity for acting on the principal which has been so repeatedly laid down by their own leaders of government by the consent of the governed.

It is believed, the correspondent says, that this purpose was in the mind of Michael Collins when he so adroitly manoeuvered his motion for the adjournment until the New Year. Already, the writer proceeds, there are some signs that the Griffith party have some grounds for the optimism which has been born during the past twenty-four hours, and for the belief that they will succeed in securing approval of the "Treaty" without any plebiscite being necessary. The voting on the amendment on Thursday night, while not on strict "party" lines, was a straw which showed clearly which way the wind is blowing. An analysis of the voting proved there were 8 or 10 supporters of de Valera who voted with Griffith, but, even allowing for that margin, it would give the latter a majority.