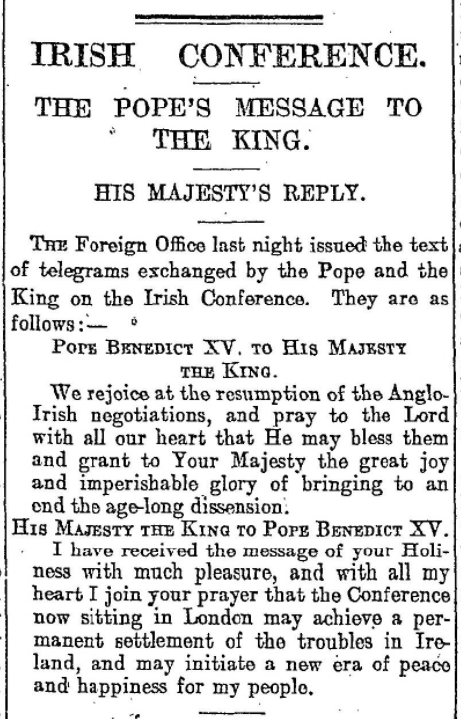 The Anglo-Irish negotiations took a long time and did not always proceed harmoniously. By the end of the discussions, the British government (according to Michael Collins) was threatening “terrible and immediate war” if the Irish plenipotentiaries did not accept the terms. Therefore, it is no surprise that various international well-wishers encouraged the continuation of the talks when they looked likely to be derailed. In this letter from Pope Benedict XV to King George V, the pope celebrated the ongoing efforts for peace. The British Monarch replied, gratefully accepting the pope’s wishes. Still, the ambiguities of the king’s language – particularly the reference to the troubles “in” Ireland and the creation of a “new era of peace and happiness for my people” did not sit well with Éamon de Valera, as can be read in his reply tomorrow.

THE POPE’S MESSAGE TO THE KING.

The Foreign Office last night issued the text of telegraphs exchanged by the Pope and the King on the Irish Conference. They are as follows:-

Pope Benedict XV, to His Majesty the King.

We rejoice at the resumption of the Anglo-Irish negotiations, and pray to the Lord with all our heart that He may bless them and grant to Your Majesty the great joy and imperishable glory of bringing to an end the age-long dissension.

His Majesty the King to Pope Benedict XV.

I have received the message of your Holiness with much pleasure, and with all my heart I join your prayer that the Conference now sitting in London may achieve a permanent settlement of the troubles in Ireland, and may initiate a new era of peace and happiness for my people.