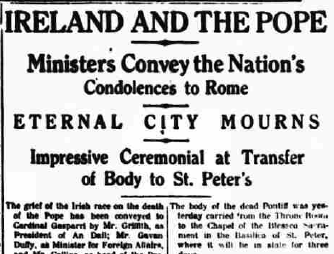 Giacomo Della Chiosa was elected Pope on September 3, 1914, in succession to Pius X. He took the name of Benedict XV. With the exception of Pius IX, who was elected Pope at the age of 54, Benedict XV was one of the youngest pontiffs of modern times, not having completed his sixtieth year at the time of his election. Pope Benedict XV would serve in his role for just shy of 16 years.

After the Vatican reported that His Holiness was to receive Extreme Unction on Friday, the Pope became delirious at noon the following day, insisting on rising to resume work. Later a state of coma commenced, from which he never regained consciousness. Death occurred at 4.45pm on 22 January, 1922, Rome time. Here, Ireland mourns the loss of their Catholic figurehead.

IRELAND AND THE POPE

Impressive Ceremonial at Transfer of Body to St. Peter's

The grief of the Irish race on the death of the Pope has been conveyed to Cardinal Gasparri by Mr. Griffith, as President of An Dáil; Mr Gavan Duffy, as Minister for Foreign Affairs, and Mr. Collins, as head of the Provisional Government. The World Congress of the Irish Race at Paris conveyed to the Sacred College through the Papal Nuncio condolences on the death of his Holiness.

In a letter to the clergy of the archdiocese of Dublin, the Archbishop recalls that the deceased Pontiff had a heart of sympathy for the misfortunes of Ireland, and with voice and material aid tried to manage the afflictions of our people. His Grace fixes Friday for the celebration of Requiem Masses for the reprise of the Pope's soul throughout the archdiocese. Arrangements are being made for a Pontifical Mass of Requiem in the Pro-Cathedral on a date to be arranged.

The body of the dead Pontiff was yesterday carried from the Throne Room to the Chapel of the Blessed Sacrament in the Basilica of St. Peter, where it will be in state for three days. Thousands of citizens of the Eternal City visited St. Peter's yesterday to pay their last respects to the Pope of Peace.

The Cardinals of the world are hastening towards Rome for the election of Benedict's successor. One of the oldest members of the Sacred College, Cardinal Almaraz y Santos, Archbishop of Seville, died yesterday. There are now 62 Cardinals comprising the Sacred College, one of them in petito i.e. one whose elevation has been so far kept secret. There are thus 8 vacancies in the College. Of living Cardinals, 8 were created by Leo XIII, 25 by Pius X and 20 by Benedict XV.