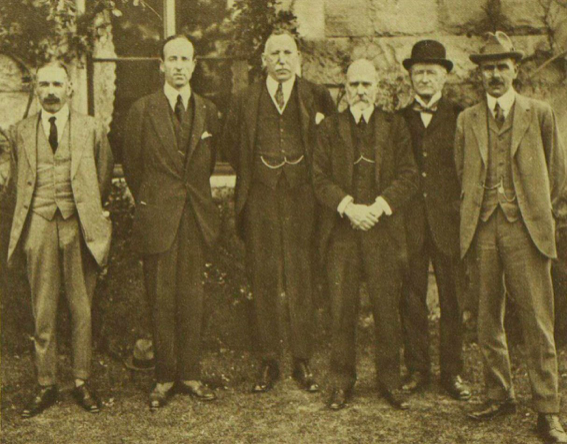 On 18 July 1921, Sir James Craig and members of his Northern Ireland cabinet met with the UK Prime Minister David Lloyd George at 10 Downing Street. The meeting was held during Lloyd George’s peace summit with a Sinn Féin delegation led by Eamon de Valera, following the previous week’s truce between British and Irish republican forces. While de Valera believed that the Prime Minister was using the Ulster question, which Lloyd George was anxious to settle, to ‘frighten’ him into concessions during the talks, Craig and his cabinet were also suspicious of the British government’s intentions. During the meeting, Lloyd George put forward five suggestions as to how the Unionists could accommodate the Sinn Féin leader’s demands for Irish unity, which would include local autonomy for a northern assembly devolved from Dublin. However, these suggestions were emphatically rejected by Craig, who believed that ‘no coercion of Ulster’ was one of Lloyd George’s non-negotiable commitments during the negotiations. James Craig and members of his cabinet pictured in London in November 1921 while the Treaty negotiations were taking place. Courtesy of The Irish News

The following were present:-

The Minister of Finance.

The Minister of Labour.

The Minister of Education.

The Minister of Agriculture & Commerce.

Colonel Spender, Secretary to the Cabinet.

The Prime Minister made it clear that his negotiations with Mr De Valera had reached no very definite stage, but that he thought he could persuade him to give way on three of the four vital points, namely, in regard to 1) allegiance to the Throne; 2) reservation of Naval and Air Force Services; 3) Free Trade with Great Britain; and that he would also be able to obtain an assurance that Southern Ireland would give some contribution towards Imperial Funds, but that on the question of Northern Ireland Mr De Valera although willing not to interfere with any of the powers transferred to Northern Ireland under the Government of Ireland Act, 1920, would only do so provided that Northern Ireland recognised “a Government of all Ireland” as the deciding factor in all other questions to be transferred, i.e. Customs; Direct Taxation; Military; Post Office; Coinage &c.

Mr Lloyd George made five suggestions as to how it might possibly be arranged that Northern Ireland should accept this latter condition, subject to certain safeguards, but the discussion of these proposals showed plainly that none of them could be acceptable to Northern Ireland.

Mr Lloyd George suggested that the Cabinet of Northern Ireland should put forward some proposals to meet the case during the next 24 hours, indicating that he did not consider that there was any chance of settlement unless some arrangement of this nature could be conceded, and that he was very averse to allowing Mr De Valera to claim that the only point of disagreement was on the Ulster Question, which he (Mr Lloyd George) thought would be less easily explained to the British Public than a disagreement on one of the other vital points.

Mr Lloyd George pressed for a further discussion, but the Prime Minister of Northern Ireland thought that this would serve no useful purpose at present, as he felt that the discussions were at present solely between Great Britain and Southern Ireland, and that the interests of Ulster had not yet become involved in a practicable manner, and that it would, therefore, be better for the Cabinet of Northern Ireland to return to Ulster, although it would be ready to return whenever required by the Prime Minister.

The Prime Minister of Northern Ireland also stated that he intended to reply to Mr De Valera’s statement about self-determination; Mr Lloyd George concurring, provided that the reply was limited to that matter.