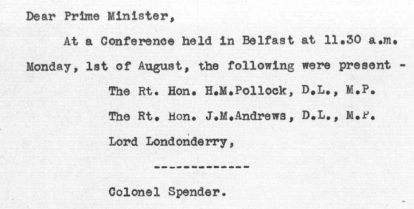 Cabinet conference... Decided no purpose would be served by the Prime Minister going to Dublin to meet Mr De Valera.

At a Conference held in Belfast at 11.30 a.m. Monday, 1st of August, the following were present –

They considered the matter which you asked me to put before them.

Like yourself, they are naturally anxious to secure peace, but they do not feel that the suggested meeting between yourself and Mr De Valera – whether accompanied or not by your cabinet – can serve any useful purpose or contribute to the end we have in view.

In view of your and their undertaking and utterances they are convinced the impression created in the Six Counties would disastrously unfavourable. Moreover, they feel there could be no adequate explanation to justify the complete change of attitude to the one which you have hitherto maintained.

They recall the facts (1) that they reluctantly consented to attend the Conference in Downing Street, presided over by the Prime Minister, and that they attended in London for that Conference.

(2) that subsequent to that invitation, Mr De Valera asked you to meet him in Dublin, an invitation which you declined in full agreement with them, giving the specific reason that you had already consented to attend the London Conference.

(3) that although they were at Downing Street at the same time as Mr De Valera no Conference took place for some reason, the explanation of which they can only surmise.

They feel that even if Mr De Valera provides the necessary guarantees asked for in your last letter they ought to be given formally in writing following any arrangements which may be arrived at in the Conference, and not after private correspondence between you.

From the tactical point of view they are convinced in the event of negotiations breaking down (an eventuality they feel bound to consider) it is infinitely preferable that the reason for the failure should be the refusal of Mr De Valera to attend the Conference at Downing Street, rather than on a more probable difference of opinion between yourself and him, which might be attributed by him and by an uninstructed public to the allegation that Ulster blocks the way.