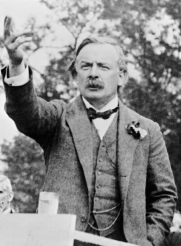 Following the Easter Rising in 1916, David Lloyd George, the British Prime Minister, sought to create a means to grant self-government to Ireland, proposing to the Irish Parliamentary Party leader, John Redmond, the idea of a convention. The Convention was to be made up of significant Irish politicians and members of society, thus becoming known as the ‘Irish Convention’.

Held at Regent House in Dublin from July 25th, 1917 until April 5th, 1918, a large cross-section of Irish political parties and associated representatives engaged in months of intense deliberations. The main divisions at the Convention centred on the level of fiscal autonomy a Home Rule parliament in Ireland would have and within Irish Unionism (between the accommodating southern Irish Unionists and the intransigent Ulster Unionists).

In March 1918, with the convention still underway, John Redmond died in London following an operation.

The final report was delivered on April 12th, 1918. However, Lloyd George’s extension of conscription to Ireland on April 18th, alongside a commitment to simultaneously implement Home Rule, precipitated a renewed political crisis in Ireland. The Irish Convention is seen as the last failed attempt to find a peaceful settlement to the ‘Irish Question’.