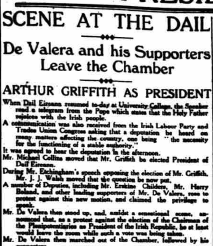 SCENE AT THE DÁIL

De Valera and his Supporters Leave the Chamber

When Dáil Éireann resumed to-day at University College, the speaker read a telegram from the Pope which states that the Holy Father rejoices with the Irish people.

A communication was also received from the Irish Labour Party and Trade Union Congress asking that a deputation be heard on many matters affecting the country, one being "the necessity for the functioning of a stable authority".

It was agreed to hear the deputation in the afternoon.

A number of Deputies, including Mr. Erskine Childers, Mr. Harry Boland, and other leading supporters of Mr. De Valera, rose to protest against this new motion and claimed the privilege to speak.

Mr. de Valera then stood up, and, amidst a sensational scene, announced that as a protest against the election of the Chairman of the Plenipotentiaries as president of the Irish Republic, he at least would leave the room while such a vote was being taken.

Mr. de Valera then marched out of the Chamber, followed by his supporters.

After Mr. de Valera and his supporters had left the Speaker put the motion.

The roll was called, and the Speaker declared Mr. Griffith elected President.

There were 65 members on the roll when Mr. de Valera and his supporters had withdrawn.

One member of each party paired off, and Mr. Derbam (Dublin) was unavoidably absent.