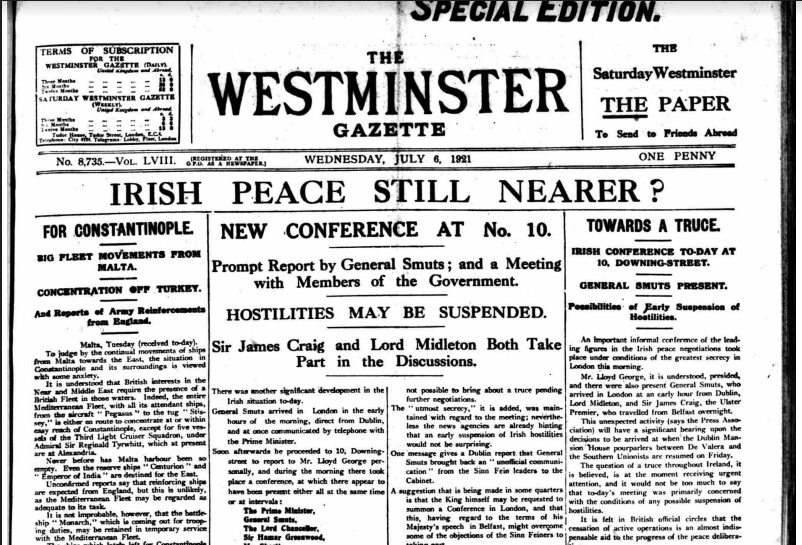 On 6 July 1921, political leaders including David Lloyd George, General Smuts and Sir Hamar Greenwood met at 10 Downing Street to discuss the current situation in Ireland. In the following report, The Westminster Gazette stated that a ‘most optimistic feeling prevails regarding the Irish question’. Only five days later a truce between Britain and Ireland began, and an Irish delegation then arrived in London on 12 July.

Towards a Truce. Irish Conference today at 10 Downing Street

An important informal conference of the leading figures in the Irish peace negotiations took place under conditions of the greatest secrecy in London this morning.

Mr. Lloyd George, it is understood, presided and there were also present General Smuts, who arrived in London at an early hour from Dublin, Lord Midleton, and Sir James Craig, the Ulster Premier, who travelled from Belfast overnight.

This unexpected activity (says the Press Association) will have a significant bearing upon the decisions to be arrived at when the Dublin Mansion House pourparlers between De Valera and the Southern Unionists are resumed on Friday.

The question of a truce throughout Ireland, it is believed, is at the moment receiving urgent attention, and it would not be too much to say that to-days meeting was primarily concerned with the conditions of any possible suspension of hostilities.

It is felt in British official circles that the cessation of active operations is an almost indispensable aid to the progress of the peace deliberations.

Possibilities of Early Suspension of Hostilities

General Smuts returned from Ireland this morning, arrived at Euston shortly after five a.m., and on reaching his hotel (says the Central News) he telephoned to the Prime Minister. After breakfast he proceeded to 10, Downing Street, where he had a long conversation with Mr. Lloyd George.

Some time later they were joined by Sir Hamar Greenwood, the Lord Chancellor, Mr. Shortt, and Mr. Balfour.

In political circles (adds the agency) a most optimistic feeling prevails regarding the Irish question.