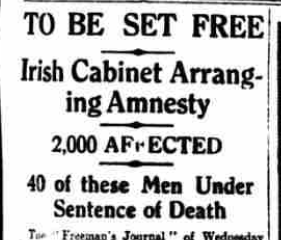 The Weekly Freeman reports a round-up of the Dáil's happenings since the 7 January, including the news that 2,000 affected men, some under the sentence of death in Britain, are due to be released.

TO BE SET FREE

40 of these Men Under Sentence of Death

The Freeman's Journal of Wednesday says; -

From inquiries made in well-informed sources, it can be stated that the new Irish Cabinet is at present in communication with the British Government with a view to a mutual amnesty.

These negotiations have proceeded so far for the liberation of the 2,000 Irish political prisoners-including over 40 who are under sentence of death - may be confidently today [...].