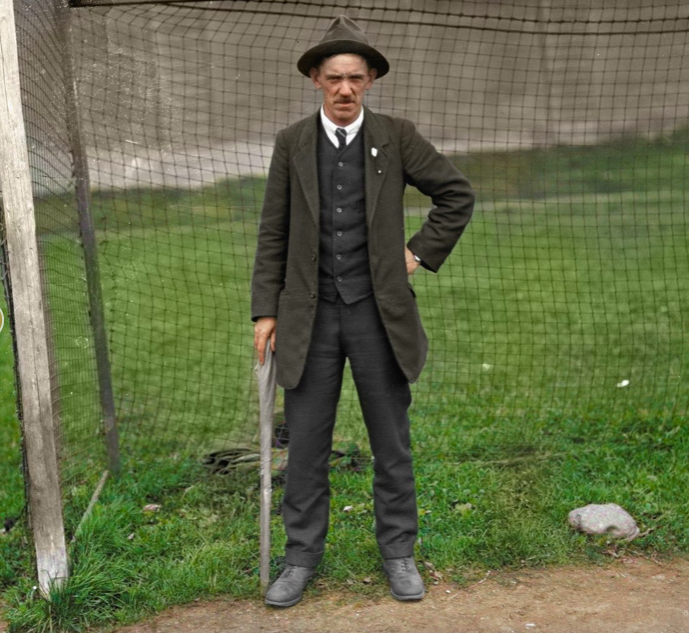 Tadgh Barry was a prominent republican and GAA activist. He fought in the Easter Rising and was an enthusiastic socialist. On 31 January 1921, British forces entered the Cork Corporation Council Chamber and arrested Barry along with eight others. According to the Irish Independent, his arrest while performing his elected duties caused an outrage, with even Unionist members of the chamber singing defiant songs to the British forces as they escorted Barry from the premises. Barry was eventually transferred to Ballykinlar Camp in County Down, where he remained until 15 November.

While accounts of what happened on 15 November vary, what is certain is that Barry was shot while other republican internees were being released. According to this article in the Irish Independent, an 18-year-old British soldier fired a single bullet into Barry’s side while he was while waving his handkerchief to the departing internees. Barry died almost instantly.

VICTIM A MEMBER OF THE CORPORATION

The sensational incident occurred as 18 internees released on parole were leaving to catch their train for Dublin.

Als. Barry was prominent amongst those assembled to give them a send-off. A shot rang out, and he was seen to fall, evidently badly wounded.

It was later found that he was fatally wounded and he expired almost immediately.

A sentry aged 18, it was reported, was placed under arrest following the tragic occurrence.

Ald. Staines, T.D., was in the compound at the time on a tour of inspection.

As is customary on the occasions of the releases of internees, those left behind assembled in the compound to give their comrades a hearty send-off, which, as usual, was accompanied by cheering and waving of hats and handkerchiefs. Prominent in this, yesterday, was Alderman Barry, who, in order to get a good look at his parting comrades, stood up on an old bucket or tin can.

He was waving a handkerchief, when suddenly a solitary shot rang out, and he fell to the ground, blood coming profusely from his side

The occurrence caused consternation amongst the internees, who became greatly excited when they saw him fall and remain lifeless on the ground. The departing internees were hurried out of the camp, but one of the released men last night informed a representative of the “Irish Independent” that he returned, but Ald. Barry had been removed, and a pool of blood marked the spot where he dropped. The report was current that he was shot dead, but he could not verify the statement.

Down the road he met Father M’Lester, chaplain, and sent him up to the camp.

Another of the released men stated, as far as he could see, the crowd inside the compound were about 14 yards from the barbed wire entanglements, cheering and shouting greetings to them as they stood in the lorry. “We were moving back to them,” he added, “and naturally we were in good spirits going off for our few days’ parole, when the shot startled the crowd of us, and we saw poor Tadgh Barry fall.

He had been standing on something, and was head and shoulders over the other fellows, and evidently this prominent position marked him out as a target for whoever fired the shot.

We saw him fall, and one of our fellows who ran back saw him bleeding from the body. He was taken away at once, and when the camp authorities became aware of what had happened we were driven out of the camp immediately to the station.

We could not discover for certain whether he was killed or not, but there is no doubt that he was badly wounded.”

“Regret to inform you that your brother has been shot.”

Ald. Barry was a native of Cork city and was prominently connected with the G.A.A. movement for many years. Subsequent to 1916 he was sentenced to 2 years’ hard labour for a speech in which he advocated the Republican cause. He took part in a big hunger strike at Cork prison in 1918. Of late years he was active in the labour movement, and was an organiser, and later branch secretary, of the Irish Transport Union. Prior to 1916 he was identified with the All-for-Ireland party led by Mr. Wm. O’Brien, and was a member of the Cork Guardians. He was also an active member of the A.O.H. (Irish-American Alliance), and did much to promote the welfare of this organisation in Munster. He was a journalist by profession, and on the inception of the “Cork Free Press” was attached to its sporting staff, taking an active interest in the advancement of the Gaelic pastimes.

While attending a meeting of the Cork Corporation on Jan. 31, when the present Lord Mayor was re-elected, Ald. Barry and 8 others were arrested in the Council Chamber. The intrusion of the Crown forces led to a dramatic scene, an impromptu concert programme being given by members of the Corporation. Sir John Scott (Unionist) sang “I Fear No Foe,” while Ald. Barry, as he was being removed, sang “I’ve been there before, many a time.”

Two other internees, it will be recollected, were shot in Ballykinlar in January – P. Sloane, Leggan, Westmeath, and Joseph Tormey, Moate.