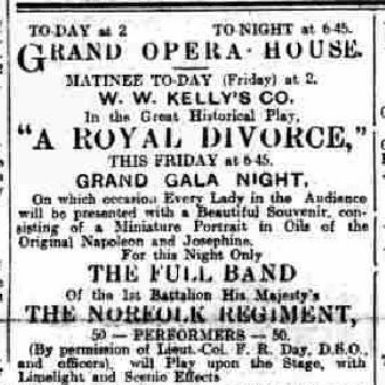 Belfast’s Grand Opera House opened in 1895 and by the early 1920s was firmly established as one of the city’s premier venues for music, theatre and variety performances. On 29 July 1921, it hosted the W.W. Kelly’s Company production of A Royal Divorce, a melodrama depicting the relationship between Napoleon Bonaparte and his wife Joséphine. The evening show was accompanied by a musical performance from the Norfolk Regiment and every woman in the audience was presented with a miniature portrait of Napoleon and Joséphine.

In the Great Historical Play,

On which occasion Every Lady in the Audience will be presented with a Beautiful Souvenir, consisting of a Miniature Portrait in Oils of the Original Napoleon and Josephine.

For this Night Only

Of the 1st Battalion His Majesty’s

(By permission of Lieut. Col. F. R. Day, D.S.O., and officers) will play upon the Stage, with Limelight and Scenic Effects

“THE BATTLE OF WATERLOO.”