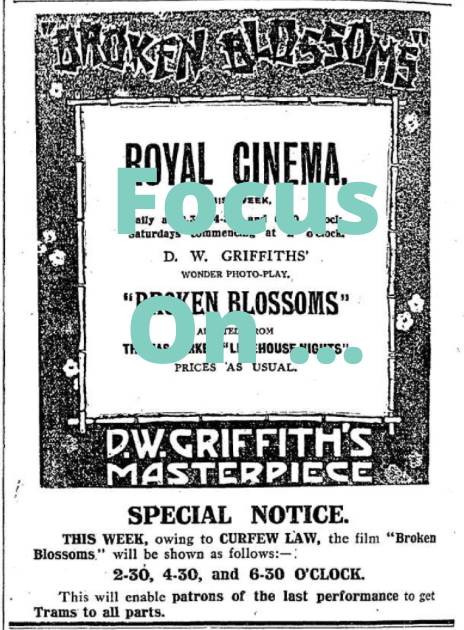 In the early 1920s, Belfast was well served by a range of venues providing regular entertainment for its citizens. This Focus On… piece looks at three of the most popular forms of commercial leisure: cinema, theatre and music. Despite the eruption of sectarian unrest in Belfast and the resulting 10.30 p.m. curfew, the city’s residents continued to attend cinemas and theatres in large numbers. Below you can find an introduction to each form of entertainment and a range of primary sources from 1921 showing the performances that took place, how people received them and the challenges for providers of entertainment.

Belfast’s first purpose-built cinemas, such as the Kelvin and the Electric Picture Palace, opened in 1910. Before then, film shows often took place in theatres, music halls, converted shops and fairgrounds. The number of venues screening films rose dramatically during the 1910s and by the outbreak of the First World War cinema had established itself as one of the most popular forms of working-class entertainment. By the beginning of the 1920s there were 26 cinemas in Belfast, varying widely in terms of price, quality, programming, and décor. The Imperial (pictured below), located in Belfast’s Corn Market, was one of the city’s more upmarket venues at that time. Only two more cinemas opened in the 1920s: the ‘bottom-of-the-market’ Diamond on the Falls Road in 1920 and the centrally located, more luxurious Classic in 1923. At least three cinemas suffered bomb damage in the early 1920s and in 1922, cinema attendant Peter Mullan was shot dead by loyalist gunmen at the Crumlin Picture House. 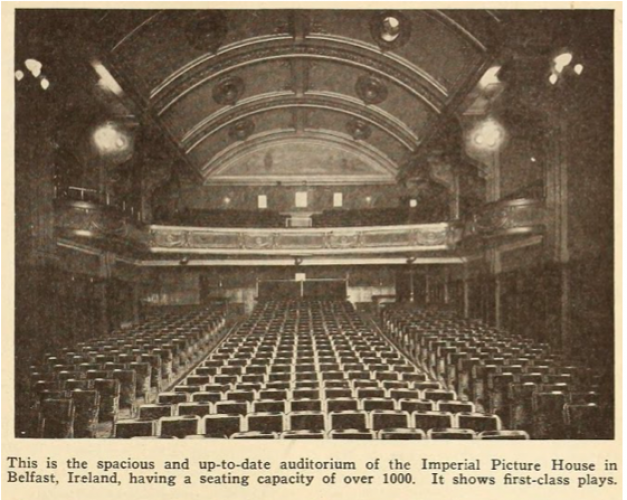 British Films in Provincial Centres. Increasing Popularity in Every Town.

Mr. Ben McDowell, managing director of Ulster Cinema Theatres, Ltd., Belfast shows at all his theatres a large percentage of British films, and he agrees that British productions should be encouraged by the exhibitor. At the same time, he is of opinion that while patriotism inclines him to favour the home production, for detail, photography, and general setting the American production still leaves the British companies somewhat in the shade. There are certainly British companies that compare favourably with American productions, but unfortunately their number is small.

Edward Clarkson, manager of the Royal Cinema, Belfast, is of opinion that British films are coming rapidly to the front, both as regards technique and everything applicable to the home production. He shows British films when possible and they are regarded by the audiences as “top notchers.” He is of opinion that in time British firms will be superior to those of any other country. Recently he has shown quite a variety of British films with undoubted success.

Mr. Fred Stewart, proprietor, Panopticon Theatre, Belfast, makes a practice of showing British films every fortnight with conspicuous success. These consist principally of subjects from dramatized novels which have been widely read. In his opinion the British films are now gaining more popularity, and they are quite as good as American.

The music in your Picture House simply scandalous… I and a lot of my friends go twice weekly but I assure you we won’t be there until there is something to listen to.

While watching the pictures in the West End Picture House, Shankill Road, towards eight o’clock last evening the audience was startled by the report of firearms. Naturally great excitement prevailed, and in the midst of it a young man was going to be wounded. The ambulance was at once summoned, and while awaiting its arrival the man received careful attention. He was conveyed to the Royal Victoria Hospital, where his name and address were given as Charles Watters (22), of 80, Joseph Street, Belfast. He was suffering from a bullet wound to one of his legs. The explanation of the occurrence is stated to be that a revolver was accidentally discharged, the bullet entering his thigh. He was detained for treatment, but his condition is not serious.

In the 1920s, several theatres provided different forms of entertainment, including plays, music hall, variety and pantomime. Belfast’s first music hall, the Alhambra, opened in 1873 and was later followed by the Empire Theatre of Varieties in 1894. The Grand Opera House, designed by noted architect Frank Matcham, opened a year later in 1895. And Great Victoria Street then became a hub for entertainment after the Royal Hippodrome was built next door to the Opera House in 1907. In the 1910s, these were later joined by ‘cine-variety’ theatres such as the Coliseum and the Gaiety. During the 1920s, local theatre groups such as the Ulster Dramatic League, the Ulster Literary Theatre and the Northern Drama League produced plays reflecting local lives and stories, holding many performances at the Grand Opera House and Dublin’s Gaiety Theatre.

Our Belfast correspondent writes that the announcement was made on Monday that, owing to restricted transport service between Great Britain and Ireland, due to the coal strike, “Hullo America” Company could not reach Belfast until Tuesday. It was added that the company would appear at Grand Opera House on that night and during the week.

The reopening of the Coliseum Theatre (Grosvenor Road), as announced in our advertising columns, will take place to-night under happy and most promising auspices. The entertainment, which will be of a varied and interesting nature, will be held under the patronage of the Lord Mayor and Lady Mayoress, while Sir Ernest and Lady Mayoress, while Sir Ernest and Lady Clark are expected to be present. The respected manager, as usual, has been very enterprising, and has arranged the artists from the local theatres will contribute. The popular prices of admission will be 1s and 2s 6d, and while the doors will open at 6.15 p.m. the programme will start at 7 p.m. A large attendance is expected, so seats should be secured as early as possible.

Mr. Fred W. Warden’s annual pantomime, which this year is founded on the popular nursery story, “Babes in the Wood,” was produced at the Grand Opera House, Belfast, on Saturday night under most auspicious circumstances. At the opening performance, and also at the matinee and evening performance yesterday, crowded houses welcomed the production, and if the enthusiasm so far manifested is any criterion the “Babes in the Wood” is likely to prove not the least successful of Mr. Warden’s twenty-seven pantomimes. Both from an amusement and an artistic standpoint is has apparently fulfilled everybody’s expectations. The magnificent scenery, and beautiful dresses are a delight to the children and the admiration of their parents, while both equally enjoy the tuneful melodies and the humorous frivolities of the comedians. Miss Lucille Benstead, the debonair principal boy, portrays the bold and chivalrous Robin Hood in traditional style, and her cultured singing has captivated all hearts.

…Dolly and Billie, the two talented American child actresses, have won hosts of admirers for their intelligence and virile acting and their dainty singing and dancing as the Babes. Mr. Fred Hutchings makes a capital Dame, and his inimitable acting as the washerwoman in the school scene is particularly funny… 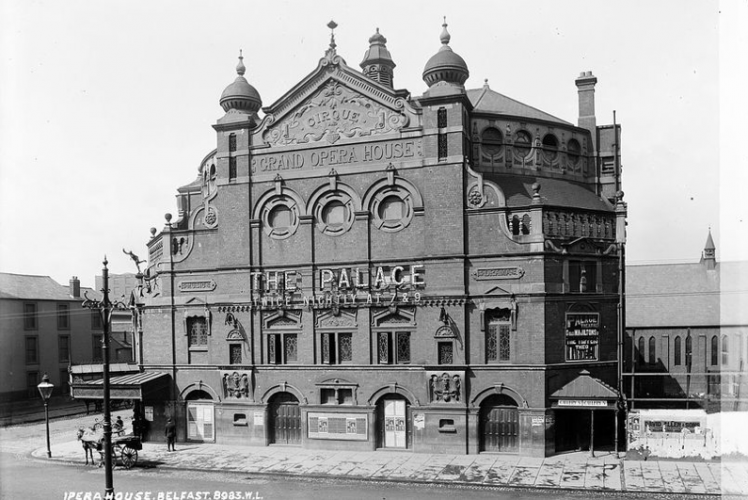 Belfast’s main concert venue, the Ulster Hall, opened in 1862 on Bedford Street. In 1902 the Belfast Corporation paid £13,500 to purchase the hall for public use. During 1921, it staged a variety of musical and dance performances, including a series of six one-act ballets performed by ‘the Pupils of the Junior Dancing Class, under Messrs. Gillis & McFarlane’. The Ulster Hall was a multi-purpose and also welcomed the king and queen during their visit to Belfast in June. Many other venues across the city hosted concerts and dances, including Wellington Hall, Co-operative Hall and the Carlton Café and Restaurant. If Belfast residents wanted to hear music at home, they also had the option of purchasing a costly gramophone or, from 1924, listening to the BBC’s Belfast station. 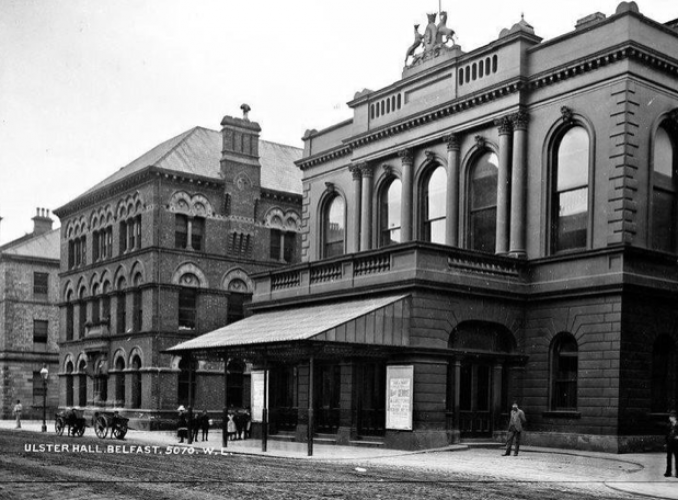 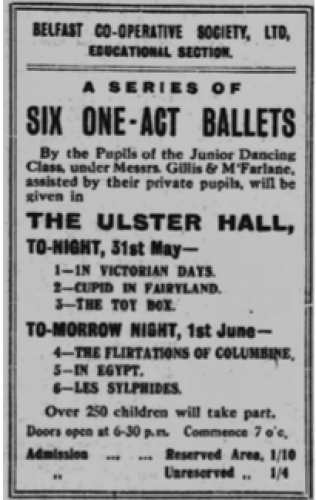 The third symphony concert of the season was held in the Wellington Hall on Saturday evening, and was, beyond doubt, the most enjoyable and successful of the series so far. The outstanding feature was, of course, the visit of Miss Carrie Tubb, the gifted soprano, who is well known to Belfast audiences. Miss Tubb has paid several visits to the Northern capital, and on each occasion her welcome has been most cordial. There was a large audience to greet her on Saturday, and she could not fail to be impressed by the warmth and cordiality of her reception. She was in excellent voice, and all her contributions to the programme were delightful. Miss Tubb has a charming personality, and she sings with insight and feeling. Her biggest item was the aria, “Ocean! Thou Mighty Monster” (“Oberon”), of which she gave a very dramatic rendering. Her glorious voice, fresh and vibrant, was heard to marked advantage in this piece, and the audience manifested their appreciation in no half-hearted manner… Her entire performance was a musical treat which will not soon be forgotten by those who were present.

There is a great rush on Gramophones just now at the well-known Gramophone House Messrs. Smyth & Co. Ltd., 91, Donegall Street. Probably the Curfew Order, with its entertainment curtailments, may have something to do with this, by bringing home to the public the great advantages a good Gramophone has in the matter of home entertainment. There is no doubt, however, that our citizens are quick to realise that it pays to deal with specialists, and Messrs. Smyth & Co.’s unique stock of such well-known Gramophones and Records as “His Master’s Voice” and “Zonophone” is having great demands made upon it. The Gramophone House is fully equal to the occasion but advises patrons to shop as early as possible to avoid the inevitable rush during Xmas week. They have the largest stock in Ireland to-day.