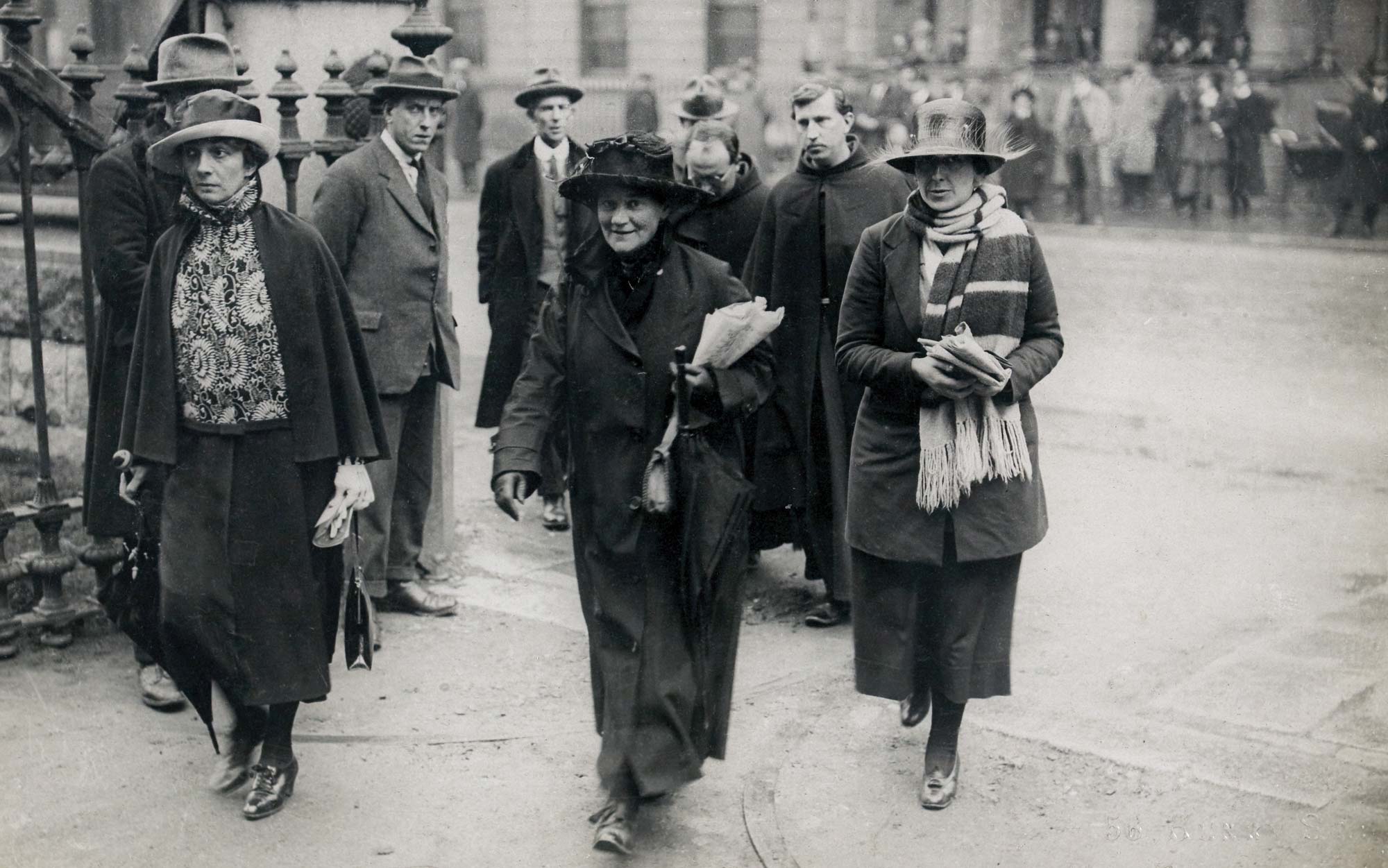 Life for women in the new state of Northern Ireland varied considerably, with a key consideration being whether they supported the imposition of partition, a decision taken solely by politicians in Westminster. Social class was important, but for everyone in the nationalist minority in the new state life was difficult, particularly if they had been previously active in the republican movement.

Republican women from branches in Ulster had been vocal in condemning partition and rejecting the Treaty settlement. When 600 delegates from Cumann na mBan met in Dublin on 5 February 1922 Elizabeth Corr from Belfast captured the drama of the moment:

The counties were taken alphabetically, beginning with Antrim and our delegate’s name was called first. Her ‘Ni toil’ was flung into the assembly in a voice that could have been heard at the Cave Hill. “Up Belfast!” said my neighbour on the gallery. The other Belfast and County Antrim delegates were as emphatic…Sometimes, a delegate, not sure of her Irish, said “Against”, but nearly all used the Irish.

In the ensuing civil war Cumann na mBan’s support to an IRA increasingly isolated and surrounded by better equipped Free State forces was vital. More than 500 women were imprisoned in consequence. Many activists found it impossible to get work and led impoverished lives, often suffering ill-health. Rose Black of Belfast was released from Armagh jail in September 1921 and re-arrested and interned in February 1923, only to be released under doctor’s orders that July. In supporting her application for a military service pension her former comrades testified she had ‘sacrificed her home, livelihood, health and sight.’ Winifred Carney, first woman to stand for election in the north in 1918, when she stood for Sinn Féin, was responsible for administering the Irish Republican Prisoners’ Dependents Fund during 1920-22. In August 1922 she was arrested and sent to Armagh jail but released on grounds of ill-health. She continued to work in the office of the Irish Transport Union and when the NI Labour Party was formed in 1924, she became a member of its Court ward. Roisin Walsh had left her post as teacher in Belfast’s St Mary’s College due to intimidation, returning home to Tyrone. After the local government elections in 1920 she was appointed by Tyrone Council as the first ever female rate collector. However, in November 1922 she was forced to leave her post after refusing to sign an oath of allegiance to the king and the NI government. She moved to Dublin where by 1931 she had become chief librarian of Dublin City. Sarah Corr and her husband, former mill owners and large farmers in Coalisland, had both been involved in supporting the IRA. After partition they became bankrupt, boycotted by their unionist neighbours. In applying for a military service pension Sarah Corr testified her husband had emigrated to America in 1929, looking for work, but died shortly after, ‘a broken man, leaving me penniless with four children.’ Her experience was not untypical. Non-republican women from a variety of backgrounds also left the north following partition. Lilian Metge, one of the suffragettes responsible for the attempt to blow up Lisburn Cathedral, settled in Dublin. Suffragette and labour supporter Marie Johnson went with her husband Thomas to Dublin, where he became a Labour Party TD. Dora Mellone, daughter of a Unitarian clergyman, who had lived in Warrenpoint and served as Northern Secretary to the Irishwomen’s Suffrage Federation, moved to County Dublin. However, many former suffragists continue to be active in public life in different ways. Margaret McCoubrey, the first woman to be appointed onto the management board of the Belfast Cooperative Society joined the NI Labour Party in the few years of a labour resurgence in Belfast. In 1929 she was elected as councillor to Belfast Corporation. Ethel Macnaghten, founder of Bushmills Suffrage Society,helped to establish the Belfast Union of Girls’ Clubs and was a Poor Law Guardian in Belfast. Dr Elizabeth Bell, who had been imprisoned in Holloway Jail and had acted as doctor to the suffragettes in Crumlin Road prison later served in Malta as part of the Army’s medical unit during the Great War. She returned to Belfast in 1917 and set up a GP practice in Great Victoria Steet. Between 1922 and 1926 Bell assisted Belfast Corporation with their Babies’ Clubs, providing subsidised milk to mothers in need. Elizabeth Priestly McCracken, who had been active in urging Ulster unionists to support the suffrage cause, was a prolific writer under the name LAM Priestly. She continued to send articles to the feminist press in Britain. In 1929, to commemorate the first Ards TT race, she wrote The Story of County Down, donating 1,000 copies as part of a fund-raising effort for a maternity hospital.

The Unionist government abolished PR in local government and re-drew electoral boundaries as a way of ensuring unionist dominance of what had been nationalist councils. The British feminist journal The Vote condemned this abolition of PR as detrimental to women candidates. The Unionist action had wider repercussions for the nationalist minority in many areas of life, including the provision of housing and jobs, but reducing the future representation of women in local government was certainly another consequence.

In January 1923 Dora Mellone, now writing for the British feminist press, reported that there had been a ‘marked change for the better’ in Belfast, where it was now ‘possible to hold a committee meeting without the members having to run the gauntlet of rifle shots, and the relaxed curfew has been a great boon.’ Once the northern parliament was established, a small group of middle class women active in informal politics began to lobby politicians in an effort to improve the lives of working class children and to raise the status of women in public life. They hoped the two female MPs, Dehra Chichester and Julia McMordie, would provide them with access to power and believed that the possession of the vote enhanced their status. For the first time they had been invited to the High Sheriff’s luncheon in Belfast, unlike previously, when they were ‘condemned to sit like the cherub aloft in the gallery’. The Belfast Women’s Advisory Council and the Londonderry Women’s Citizens Association worked together to argue for laws passed by the Imperial Parliament to be passed also in the north. They also renewed a campaign for a force of women police, with uniforms, reasonable pay and full powers of arrest, organising a meeting addressed by Commandant Allen OBE. A resolution was passed calling on the Minister for Home Affairs to appoint such a force, ‘as such action would be in the best interests of the citizens.’ Women held conferences on education, the licensing laws and on the provision for children of unmarried parents. Through women’s pressure on the Parks Committee two playgrounds were opened in overcrowded areas of Belfast, where children descended like ‘swarms’. With the post-war depression in the linen industry leading to women’s unemployment, they called for women to be appointed as park supervisors in deprived areas.

Averill Deverell of Dublin and Frances Kyle were the first women to become barristers in Ireland. On 14 November 1922 Kyle was elected a member of the circuit of Northern Ireland, the first woman to enter the legal world of the north. In June 1923 Mary Dorothea Heron qualified from Trinity College Dublin as the first female solicitor in Ireland. Through her grandfather Heron was connected to Margaret Byers, pioneer of women’s education and the founder of Victoria College in Belfast.

As the new state of Northern Ireland began to put administrative structures into place the Belfast Women’s Advisory Council organised a deputation to put forward recommendations to the Lynn Committee, which had been set up to advise on the contents of an education bill. The women wanted compulsory education until 16, the abolition of exemption for seasonal work such as potato harvesting, the provision of school dinners for all and better provision for children with special needs. They hoped the long-expected bill ‘will prove that the woman voter can really influence legislation’, but the 1923 Act gave local authorities responsibility for many areas, including the provision of education for ‘afflicted’ children, and enforcing school attendance, and only three local authorities took responsibility for ‘necessitious’ children. When attempts were made to end jury service for women, the Council organised a female JP to give a lecture on the need for women jurors, and organised another deputation, which was, they were pleased to add, ‘supported by one of the newly elected women MPs.’ Real progress in this deeply conservative and church-dominated state was painfully slow.