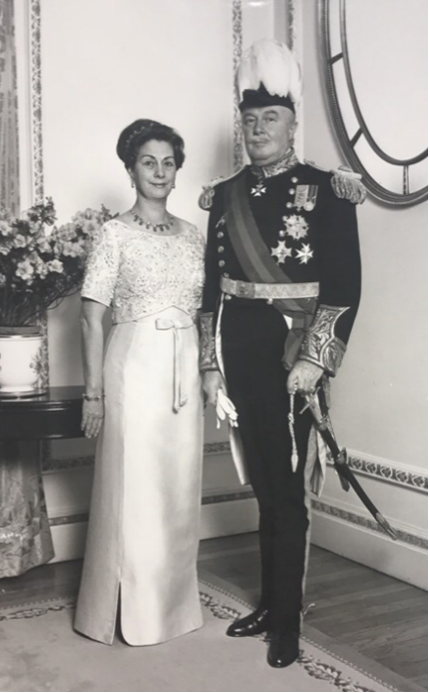 On 16 November 1932 Parliament Buildings, located in the Stormont Estate on the outskirts of Belfast, was officially opened by the Prince of Wales as the official base for the Parliament of Northern Ireland. Much excitement was evident among the unionist population for this event, with thousands lining the processional route and thousands more congregating in the grounds of Stormont. Many distinguished guests were also present, including leading social and political figures. Among them was the Duke of Abercorn in his capacity as Governor of Northern Ireland, a position created in 1922 to represent the British monarch. Duke and Duchess of Abercorn

Rather than being created through the Government of Ireland Act 1920, this position was created through the Irish Free State (Consequential Provisions) Act in December 1922, which also created the position of Governor-General in the Irish Free State. Between 1922 and 1972, five men would be appointed as Governor of Northern Ireland: Duke of Abercorn, Earl Granvile, Lord Wakehurst, Lord Erskine and Lord Grey. As all five men were married, five women thus took on the role of Governor’s wife.

Although they had no official title and no official role, the position of Governor’s wife offered these five women a place at the top of Northern Irish society. They did not have access to traditional routes of power and influence, but their privileged position allowed them to experience an unofficial leadership role and exercise ‘soft power’ in other ways. They did this by hosting important guests at Government House, the official residence of the Governor, by hosting dinner parties and garden parties and by their presidency and patronage of various charities and organisations. Hillsborough Castle which acted as residence for the Govenors

Working with women, children, healthcare and charitable work were some of their predominant public activities, deemed suitable for gendered understandings of suitable ‘women’s occupations’. The Duchess of Abercorn, for example, campaigned for funds for a new maternity hospital in Belfast and helped establish this in 1933 to deal with high levels of infant and maternal mortality deaths, while Countess Granville became the first female District President of the Nursing and Cadet Division of the Northern Ireland branch of St John’s Ambulance Brigade. Some of these women, most notably wife of the third Governor, Lady Wakehurst, also pushed beyond gender boundaries. She was passionate about education for young women, campaigning for better educational opportunities. She was also interested in proper healthcare facilities for mental health, campaigning for mental health services, and eventually founded and became President of the Northern Ireland Association for Mental Health (NIAMH) in 1959, which still exists today. Significant moments in the history of Northern Ireland also provided opportunities for the wives. The Duchess of Abercorn established and was President of the ‘Ulster Gift Fund’ during the Second World War, formed under the authority of the Ulster Women’s Unionist Council which had originally formed to protest Home Rule. This Fund allowed women throughout Northern Ireland to provide supplies to troops serving in the war and the Duchess played a central role in this, presiding at annual meetings and organising fundraising events. Although events such as the opening of Stormont, portrayed the Governor’s wife as adopting an auxiliary role, it is evident that the wives used their influence in other ways to establish the role of Governor’s wife as a leading figure in society.

Attitudes towards the governorship

In many ways, the attitudes towards these women and their public roles were largely influenced by political and religious divides. Differing attitudes were obvious as the unionist population placed a lot of value on the governorship, while the nationalist community largely regarded it as an embodiment of partition due to the connections it had with the monarchy. Although the Governors’ wives did not publicly address these differing attitudes, this influenced the causes to which they lent their support, as they chose organisations which responded positively to their work, typically those connected to the unionist population.

Unionist connections were further evident as the Governors’ wives socialised with other elite women, most of whom were of unionist backgrounds. Many of the events the Governors and their wives attended were thus dominated by leading unionist figures, something that was to characterise the events they attended and hosted throughout the governorship, as nationalists generally refused their invitations to Government House. Events were elaborate affairs far removed from ‘ordinary life’ in Northern Ireland. The Duke of Abercorn surrendered twenty per cent of his salary in 1931 in a particularly difficult economic crisis in an attempt to bridge this divide, but the office was still criticised by nationalists.

Criticism within the nationalist community became gradually more pronounced throughout the governorship, particularly by the 1960s with the emergence of the Civil Rights Movement. The wider social and political conditions of Northern Ireland impacted on the experiences of the Governors’ wives, as opportunities for Lady Erskine and Lady Grey amidst social and political unrest were undoubtedly fewer than their predecessors, largely due to security concerns. Rather than growing in influence and continuing to grow as a leading figure of society, there was thus a decline in the influence and involvement of the Governors’ wives by the 1960s. The position of Governor of Northern Ireland was eventually abolished in 1972 following the collapse of the Stormont government and the introduction of direct rule from Westminster. Having lasted for the first fifty years of Northern Ireland’s existence, the governorship and the actions of the Governors’ wives can act as a valuable lens through which to explore significant political, cultural and social developments in the early history of Northern Ireland.