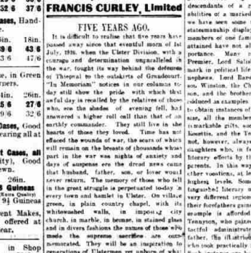 On 1 July 1916 at 7:30am, the 36th (Ulster) Division were one of the first groups to go over the top of their trenches following an allied bombardment of the German lines. The consequence for the British Army was horrific. Of the 120,000 who advanced, 57,470 suffered casualties in the single greatest loss of men by the British Army in one day. The 36th (Ulster) Division was hit particularly hard with 5,500 dead, wounded or taken prisoner from a divisional strength of 15,000. On the fifth anniversary of the first day on the Somme, the Belfast Telegraph printed an editorial remembering the soldiers who lost their lives. 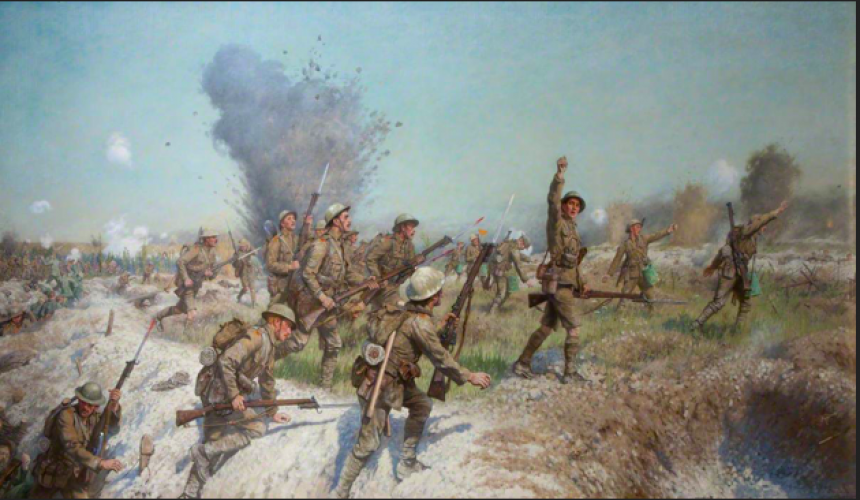 It is difficult to realise that five years have passed away since that eventful morn of 1st July, 1916, when the Ulster Division, with a courage and determination unparalleled in the war, fought its way behind the defences of Thiepval to the outskirts of Grandcourt. “In Memoriam” notices in our column today still show the pride with which that awful day is recalled by the relatives of those who, ere the shades of evening fell, had answered a higher roll call than that of an earthly commander. They still live in the hearts of those they loved. Time has not effaced the wounds of war, the scars of which will remain on the breasts of thousands whose part in the war was nights of anxiety and days of suspense ere the dread news came that husband, father, son, or lover would never return.

The memory of those who fell in the great struggle is perpetuated to-day in every town and hamlet in Ulster. On village green, in plain country chapel, with its whitewashed walls, in imposing city church, in marble, in bronze, in stained glass and in divers fashions the names of those who made the supreme sacrifice are commemorated. They will be an inspiration to generations of Ulstermen yet unborn of what their sires did in the stirring days of 1914–18, when the fate of the world hung in the balance. The Ulster Division had not and never claimed monopoly of valour during the war, but it is natural that on the 1st July our thoughts should turn to the wonderful fight it made on the slopes of Thiepval, to which his Majesty the King made reference so recently in his speech in the Ulster Hall last month…

Five years have gone to-day since they made the last great sacrifice, but the spirit that animated them to go forth and die for the Empire means as much to Ulster to-day as it did in 1916, and it will ever be so. Politicians and Republicans may scheme and manoeuvre till they are tired, but Ulster is still in the British Empire, and is going to stay in it.