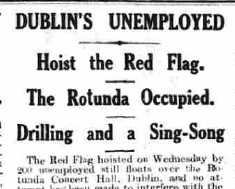 On January 18 1922, a group of unemployed Dublin workers including the future noted author Liam O'Flaherty, seized the Rotunda Concert Hall in protest of the "apathy of the authorities" and flew a red flag from one of the windows. Many Dubliners were hostile to the sight of the red flag and the demonstration soon attracted an angry mob. O’Flaherty issued a Manifesto to the Citizens of Dublin, asking for residents’ support. It asked: “Do the citizens of Dublin want highway robbery to be the order of the day? Do they want chaos and anarchy? If not, let them rally to the support of the Dublin Council of Unemployed, and procure work for the workless, and maintenance until work is supplied.”

The Rotunda was evacuated around midnight the day after this headline was published, following another evening of hostility during in which shots had been fired over the heads of the mob outside the Rotunda. The occupiers eventually relented; the unemployed men were allowed leave by the side exit of the building in batches and walked away quietly into the city. The Rotunda Round Room from O’Connell Street (formerly Sackville Street), circa 1913. Courtesy of National Library of Ireland/Flickr commons

Drilling and a Sing-Song

The Red Flag hoisted on Wednesday by 200 unemployed still floats over the Rotunda Concert Hall, Dublin, and no attempt has been made to interfere with the men in possession.

A visitor to the building yesterday found the men being marshalled by their section leaders and appointed to different charges. The strictest discipline is being maintained, and on Wednesday night an officer was courtmartialed and reduced to the ranks for disobeying orders.

Tree of the rank and file who resisted arrest by the unemployed police force established to keep order, were expelled from the premises. The garrison of 125 men passed a pleasant night.

They spent most of their time in going through military evolutions, and occupied the remaining hours with an impromptu concert. They were provided with meals several times during the night, and no shortage of food as been experienced. Forage parties were sent out yesterday morning.

Mr. Liam O'Flaherty, Chairman of the Dublin Council of Unemployed , is styled by his followers as "Commander-in-chief".