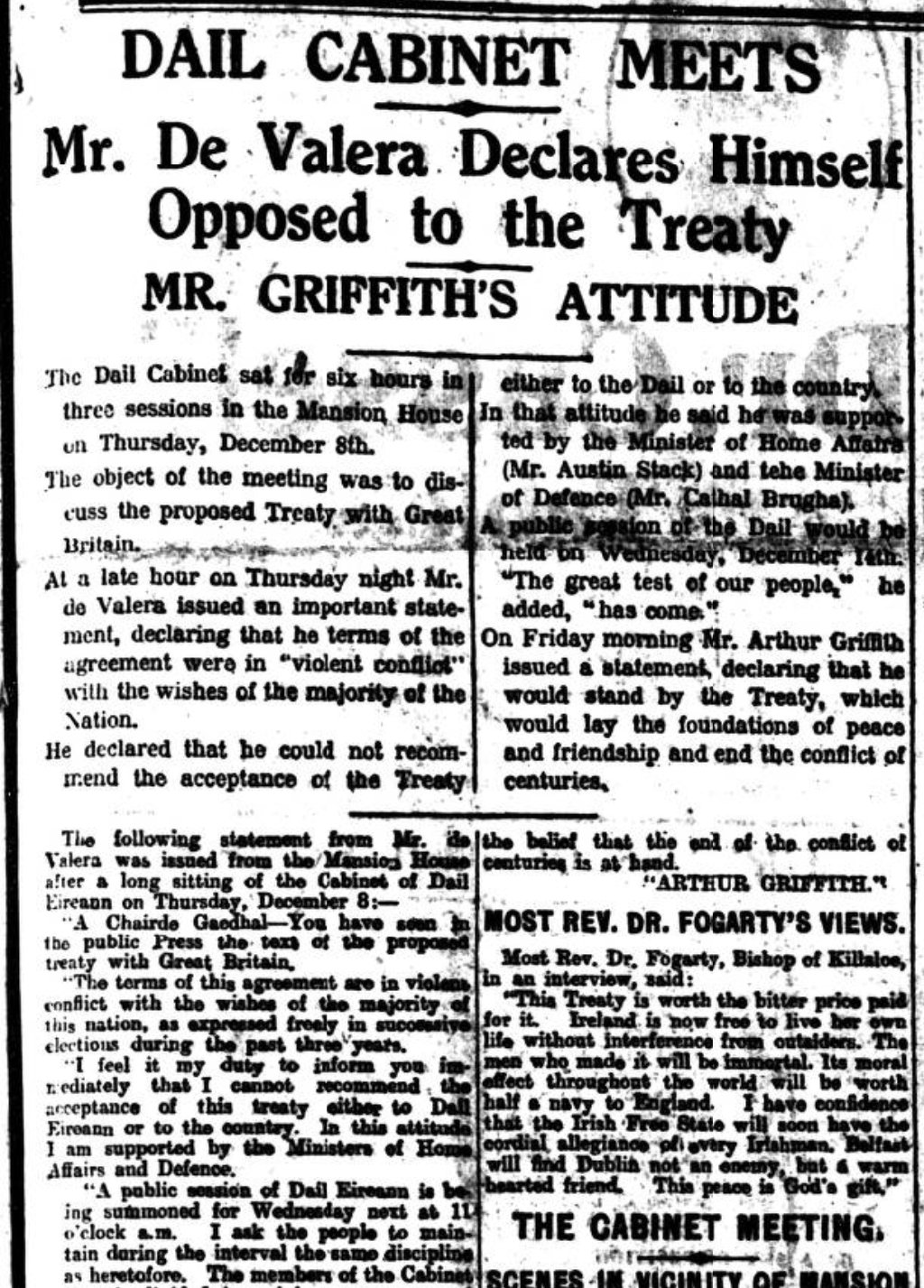 Only three days after the plenipotentiaries signed the Anglo-Irish Treaty, the most powerful politician in Ireland publicly declared his opposition to it. Following hours of meetings at the Mansion House in Dublin, on the evening of 8 December Éamon de Valera gave a statement to the press (reproduced below) announcing his opposition to the text brought home by his representatives. One of the primary negotiators for the Irish in Britain, Arthur Griffith felt compelled to defend the same document the following day. The seeds of the Irish Civil War, which was to devastate the new state from 1922-1923, were sown.

Mr. De Valera Declares Himself Opposed to the Treaty

The Dail Cabinet sat for six hours in three sessions in the Mansion House on Thursday, December 8th.

The object of the meeting was to discuss the proposed Treaty with Great Britain.

At a late hour on Thursday night Mr. de Valera issued an important statement, declaring that the terms of the agreement were in “violent conflict” with the wishes of the majority of the Nation.

He declared that he could not recommend the acceptance of the Treaty either to the Dail or to the country.

A public session of the Dail would be held on Wednesday, December 14th. “The great test of our people,” he added, “has come.”

On Friday morning Mr. Arthur Griffith issued a statement, declaring that he would stand by the Treaty, which would lay the foundations of peace and friendship and end the conflict of centuries.

The following statement from Mr. de Valera was issued from the Mansion House after a long sitting of the Cabinet of Dail Eireann on Thursday, December 8:-

“A Chairde Gaedhal – You have seen in the public Press the text of the proposed treaty with Great Britain.

“The terms of this agreement are in violent conflict with the wishes of the majority of this nation, as expressed freely in successive elections during the past three years.

“I feel it my duty to inform you immediately that I cannot recommend the acceptance of this treaty either to Dail Eireann or to the country. In this attitude I am supported by the Minister of Home Affairs and Defence.

“A public session of Dail Eireann is being summoned for Wednesday next at 11 o’clock a.m. I ask the people to maintain during the interval the same discipline as heretofore. The members of the Cabinet though divided in opinions, are prepared to carry on the public services as usual.

“The army as such is, of course, not affected by the political situation – and come under the same orders and control.

“The great test of our people has come. Let us face it worthily without bitterness, and, above all, without recriminations. There is a definite constitutional way of re-solving our political differences. Let us not depart from it, and let the conduct of the Cabinet in this matter be an example to the whole nation. – Mise,

“I have signed the treaty of peace between Ireland and Great Britain.

“I believe that this treaty will lay the foundation of peace and friendship between the two nations.

“What I have signed I shall stand by, in the belief that the end of the conflict of centuries is at hand.