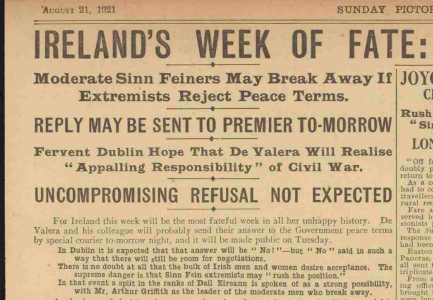 Following David Lloyd George’s address to the House of Commons stating that there was no further room for negotiations, newspapers reported that de Valera would send his answer to the British Government’s peace terms by special courier on 22 August. The Sunday Mirror ‘expected that that answer will be “No!”—but “No” said in such a way that there will be still room for negotiations’.

Irish Belief That Way Will Be Kept Clear for Negotiations

Ireland’s hour of destiny is at hand. The most fateful week in its unhappy history opens on Monday with a secret session of Dail Eireann.

The only subject for discussion will be the Government peace offer.

Apparently the Dail has already made up its mind to reject this offer, so that the main decision is a foregone conclusion.

Everybody is hoping, however, that the answer will not be an unqualified “No!” and that the door to peace will not be fatally and definitely closed.

The secret session is not expected to last more than a few hours, but the result will not be made known until Tuesday, when a public session will be held.

The Dail will prepare a long statement on Monday setting forth in detail the reasons for its decision.

It will probably be sent to Downing-street by special courier on Monday evening.

It is expected that the general terms of the Dail’s reply will be such as to make possible a further overture by the Premier.

“The renewal of hostilities,” says the Irish Times to-day, “would, to say the least, be a grave disappointment.”