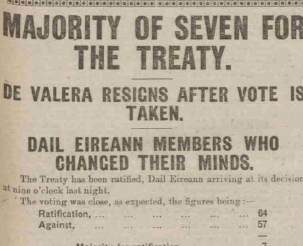 MAJORITY OF SEVEN FOR THE TREATY.

The Treaty has been ratified, Dáil Éireann arriving at its decision at nine o'clock last night.

The voting was close, as expected, the figures being:-

Mr de Valera announced his resignation after the voting on the Treaty concluded.

In the concluding debate two members of the Dáil stated that since they had visited their constitutions they had changed their minds, and would vote for the Treaty.