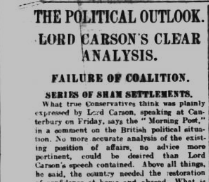 A series of Post-War crises faced the British Coalition Government in early 1922, including the largely inaffcetive League of Nations, which gave rise to a host of Foreign Policy disaster to follow. Factions within the Conservative party felt let down by Lloyd George's politics, sealing the Prime Minister's fate on 19 October 1922 by voting in favour of the motion to end the coalition and fight the election "as an independent party, with its own leader and its own programme." Here, Edward Carson sews the seeds of discontent amongst more radical Unionists.

What true Conservatives think was plainly expressed by Lord Carson speaking at Canterbury on Friday, says the "Morning Post" in a comment on the British Political situation. No more accurate analysis of the existing position of affairs, no advice more pertinent, could be desired than Lord Carson's speech contained. Above all things, he said, the country needed the restoration of confidence at home and abroad. What is the result of three years of Coalition Government under Mr. Lloyd George? Briefly, the exact opposite of confidence both at home and abroad. It was solely for that purpose of restoring confidence that the Coalition Government were returned to power. after a series of makeshifts and sham settlements unparalleled in history, Conservatives are now being admonished to trust the Coalition. Lord Derby, on Saturday, ingeniously asked his audience if there were any man with the possible exceptions of Mr Arthur Balfour who has the same authority in foreign affairs that Mr. Lloyd George has? We do not, nor do we know any other statesman who has so consistently misused it.

"Trust the Coalition!" said Lord Carson. "I do not, and I won't, and I advise you not to" And he added, with perfect truth, "There is no Coalition. there is a Lloyd Georgian Government and nothing else." The same truth seems to have been dimly perceived by Lloyd Derby when he suggested that we should, if possible, retain his - the Prime Ministers - services as the head of the Government. Here, indeed, is the real issue. To Lord Carson and, as we believe, to a great many of the Conservatives in the country, the existence of a purely Lloyd Georgian Government is a reason for getting rid of it in order to start a fresh.

To Lord Derby, whose views command respectful attention. Mr. Lloyd George is indispensable and Lord Derby actually proposes that if there is an election Conservatives should stand as allies of a new Coalition of which the other wing is to consist of Mr. Lloyd George, with his Liberal supporters, his Liberal organisations and the two parties linked upon a real policy of retrenchment and economy. The answer to Lord Derby's bland suggestion is that, as Lord Carson said, Mr. Lloyd George has killed the Unionist Party and do not let him kill the Conservative party. If there is to be a Conservative party at all how, we would ask, in the name of common sense, can it be allied to the Mr. Lloyd George? The Prime Minister constantly and fervently describes himself as a Liberal. He may be a Liberal in theory; in practice he is and always has been a socialist - in any case not a Conservative.

The Unionist party being dead and buried and our of the way, Mr. Lloyd George is setting himself to disarm Conservatives by some such method as Lord Derby proposed. But Conservatives are convinced with Lord Carson that there ought to be always under our Constitution an alternative Government, because you never know the moment when the whole body politic or a great body of them bay become discontented with the existing Government, and then what is your safety? Mr. Lloyd George, with extraordinary address, succeeded in abolishing the alternative Government, saying, in effect, that the safety of the country consists in maintaining him as Prime Minister in any and every Government.

Now, or later, the country will be forced to decide whether or not Mr. Lloyd George's atrocity is to continue at the cost of the extinction of the Conservative party. The choice as Lord Canon affirmed, is a great responsibility. Conservatives must make their selection at once lest they be taken unawares.