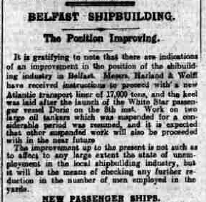 Two weeks after Harland & Wolff reconditioned and renovated the Baltic, the Belfast News-Letter reported recent improvements in Belfast’s shipbuilding industry. It detailed two new passenger ships launched by the company: the Doric and the Bendigo. The former was put into service in 1923 and largely served the White Star Line’s Canadian route, later becoming a Mediterranean cruise ship. In 1935, the Doric collided with another vessel and, despite emergency repairs, was sold for scrap. It is gratifying to note that there are indications of an improvement in the position of the shipbuilding industry in Belfast. Messrs. Harland & Wolff have received instructions to proceed with a new Atlantic transport liner of 17,000 tons, and the keel was laid after the launch of the White Star passenger vessel Doric on the 8th inst. Work on two large oil tankers which was suspended for a considerable period was resumed, and it is expected that other suspended work will also be proceeded with in the near future.

The improvement up to the present is not such as to affect to any large extent the state of unemployment in the local shipbuilding industry, but it will be the means of checking any further reduction in the number of men employed in the yards.

The large twin screw passenger vessel Doric, built by Messrs. Harland & Wolff, Ltd., Belfast, for the White Star Line, was successfully launched on the 8th inst. The vessel, which has a gross tonnage of 16,600, has a cruiser stern, and is the third of a new type of ship, passenger accommodation being provided for cabin and third class only, as in the case of the Regina and Pittsburgh. There are thirteen watertight compartments, and the double bottom extends right fore and aft. Provision has been made for about 600 cabin and 1,700 third class passengers.

The s.s. Bendigo, a large twin-screw passenger vessel of 13,100 tons, built by Harland & Wolff, Ltd., Greenock, to the order of the Peninsular and Oriental Steam Navigation Company for their Branch Line Service, was handed over to the owners on the 9th inst. After undergoing satisfactory trials in the Clyde. The vessel in intended for the emigrant trade to Australia. Accommodation on a very complete scale has been provided for about 500 cabin passengers and accommodation is available for nearly 1,000 third class passengers on the main deck.