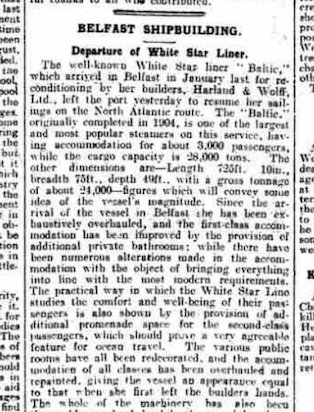 Baltic was the third of White Star’s ‘big four’ passenger ships; the other three being Celtic, Cedric and Adriatic. It first left the Belfast shipyard in 1904 and then made regular trips across the Atlantic between Liverpool and New York. It also transported World War One troops from 1915 to 1918. In July 1921, the Belfast News-Letter reported that Harland & Wolff had reconditioned and renovated the ship, updating its décor and machinery. Baltic made her final voyage in 1932 and was then broken up the following year.

The well-known White Star liner “Baltic,” which arrived in Belfast in January last for reconditioning by her builders, Harland & Wolff, Ltd., left the port yesterday to resume her sailings on the North Atlantic route. The “Baltic,” originally completed in 1904, is one of the largest and most popular steamers on this service, having accommodation for about 3,000 passengers, while the cargo capacity is 28,000 tons. The other dimensions are—Length 725ft. 10in., breadth 75 ft., depth 49ft., with a gross tonnage of about 24,000—figures which will convey some idea of the vessel’s magnitude. Since the arrival of the vessel in Belfast she has been exhaustively overhauled, and the first-class accommodation has been improved by the provision of additional private bathrooms; while there have been numerous alterations made in the accommodation with the object of bringing everything into line with the most modern requirements. The practical way in which the White Star line studies the comfort and well-being of their passengers is also shown by the provision of additional promenade space for the second-class passengers, which should prove a very agreeable feature for ocean travel. The various public rooms have all been redecorated, and the accommodation of all classes has been overhauled and repainted, giving the vessel an appearance equal to that when she first left the builders hands. The whole of the machinery has also been thoroughly overhauled while the vessel has been in the hands of the builders.