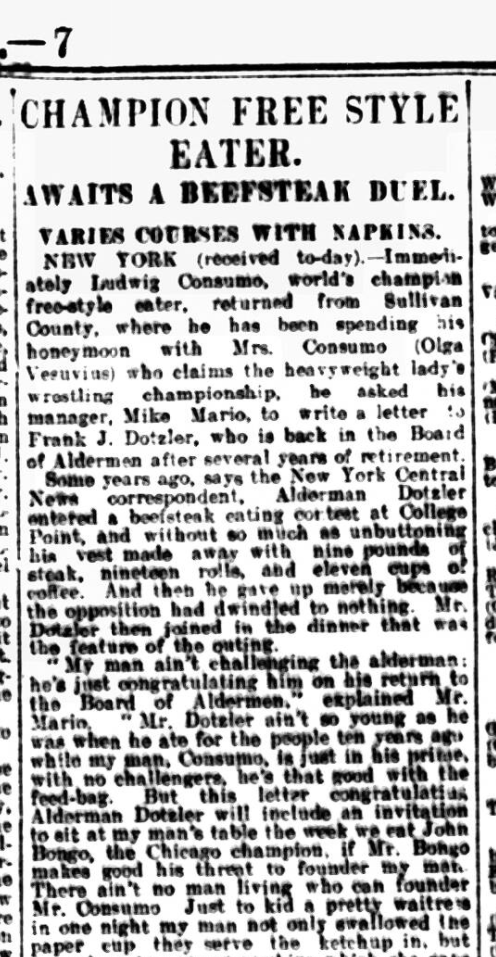 While Britain and Ireland were reacting to the news of the Anglo-Irish Treaty, the Belfast Telegraph found space to report on competitive eating from across the Atlantic. Competitive eating has a long history, with accounts of eating competitions with the Gods appearing in 13th century Norse myths. This article shows that the tradition was alive and well in the early 20th century: Ludwig Consumo, then world champion free-style eater, requested the presence of the legendary Frank J. Dotzler at his next bout against John Bongo, the Chicago champion. The 400lb Dotzler had previously set records eating at dedicated “Fat Men’s Clubs” and in his new job as New York City Alderman had to have a custom made seat created for him.

Consumo’s performances were bolstered by the advertising style of his manager, Mike Mario, who recounted Consumo’s antics (which included eating paper cups and apple theft) with gusto.

NEW YORK (received to-day). – Immediately Ludwig Consumo, world’s champion free-style eater, returned from Sullivan County, where he has been spending his honeymoon with Mrs. Consumo (Olga Vesuvius) who claims the heavyweight lady’s wrestling championship, he asked his manager, Mike Mario, to write a letter to Frank J. Dotzler, who is back in the Board of Aldermen after several years of retirement.

Some years ago, says the New York Central News correspondent, Alderman Dotzler entered a beefsteak eating contest at College Point, and without so much as unbuttoning his vest made away with nine pounds of steak, nineteen rolls, and eleven cups of coffee. And then he gave up merely because the opposition had dwindled to nothing. Mr. Dotzler then joined in the dinner that was the feature of the outing.

“My man ain’t challenging the alderman: he’s just congratulating him on his return to the Board of Aldermen,” explained Mr. Mario. “Mr. Dotzler ain’t so young as he was when he ate for the people ten years ago, while my man, Consumo, is just in his prime, with no challengers, he’s that good with the feed-bag. But this letter congratulating Alderman Dotzler will include an invitation to sit at my man’s table the week we eat John Bongo, the Chicago champion, if Mr. Bongo makes good his threat to founder my man. There ain’t no man living who can founder Mr. Consumo. Just to kid a pretty waitress one night my man not only swallowed the paper cup they serve the the ketchup in, but lapped up two paper napkins which she gave to him. That’s the kind of novelties we throw in. But we’re going to ask Alderman Dotzler to sit at our table why we eat this guy Bongo loose from his breath. As far as I can learn from Alderman Zeltzner, who knows Alderman Dotzler well, and who offers to introduce my man to Alderman Dotzler, Alderman Dotzler never went in for real heavy eating. He was what we’d call a lunch eater. As far as we know he never ate no dessert the day he got away with that nine pounds of steak, nineteen rolls, and eleven coffees. Just to see what my man Consumo thought of that as a meal, I asked him could he do it.

“So I wonder what Alderman Dotzler will say when he hears that my man up in Sullivan County, with his bride, Olga Vesuvius, went into an orchard one afternoon and found a bag holding a bushel of apples. He ate the apples, and just as he finished he saw the farmer coming, so he stuck the bag up under his vest and leaps the fence before the farmer notices nothing was missing. And Ludwig didn’t even mention it to me. Olga Vesuvius tells me, saying my man was always pulling some crack like that up there in Sullivan County. We will let Alderman Dotzler know the minute this man, Mr. John Bongo of Chicago, accepts our challenge. If Alderman Dotzler wants to honour us with his presence when we founder this tank champ he can sit at my man’s table during the slaughter.”