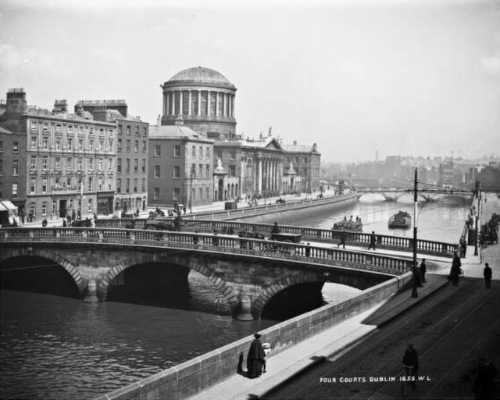 View of the Four Courts in Dublin. © National Library of Ireland.

Women began serving on juries in Irish courts in 1921, following an act of parliament passed in Westminster in 1919 permitting female jurors. The Irish Independent carried reports of the first ‘lady jurors’ called to serve on juries at the Four Courts in February 1921. Following the creation of the Irish Free State in 1922 politicians sought to exclude women from jury service, arguing that women should not be exposed to the horrors of criminal trials. In 1927 women were automatically exempted from jury service – this law remained in force until 1976.

Lady Jurors on the Panel

Lady jurors attended Four Courts yesterday to answer, for the first time, summonses to serve on the jury panels.

There were 42 of them present and fines of £2 were imposed on six who failed to attend. Similar fines were imposed on 12 men. Half-a-dozen benches of the King’s Bench No. 2 were occupied exclusively by lady jurors. They were of varying ages and occupation; some young, some of mature years; several were hotel proprietresses, and others shopkeepers, milliners, and costumiers.

Mr Justice Dodd, who addressed the combined jurors as ‘ladies and gentlemen’ admonished the ladies to speak more loudly to avoid the possibility of the fine for non-attendance.

Some were excused or expunged from the list on the grounds of age, and one lady because she was a school teacher. The ladies liable to serve may be called to do so to-day in the city common jury cases, and to-morrow in the city special jury ones.

View of the Four Courts in Dublin. © National Library of Ireland.