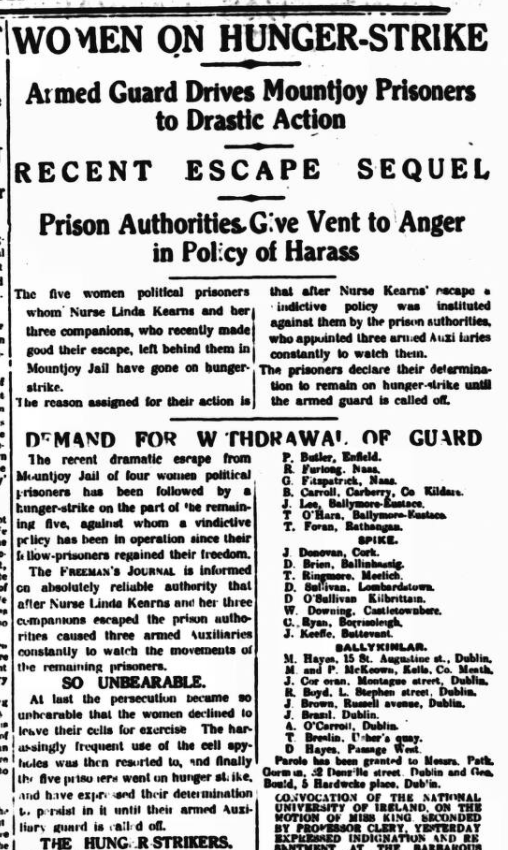 In late October 1921, Linda Kearns, Mae Burke, Eileen Keigh and Eithne Coyle broke out of Mountjoy prison. They had been arrested for republican activities and, according to Kearns, had been badly beaten by the police officers who arrested them. Their escape, which Michael Collins organised, proved a great embarrassment to the British administration. As a result, accounts of prison guard mistreatment of the prisoners increased in the subsequent weeks. This article from the Freeman’s Journal details the poor conditions in the prisons and the prisoners’ efforts to secure better treatment through hunger strikes. 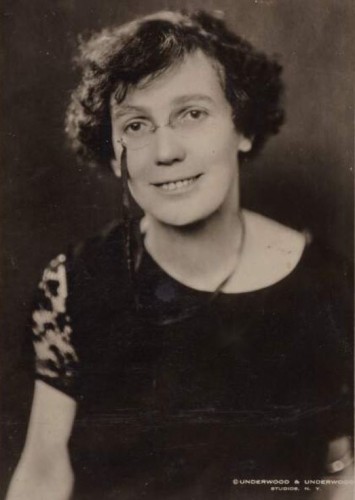 Prison Authorities Give Vent to Anger in Policy of Harass

The five women political prisoners whom Nurse Linda Kearns and her three companions, who recently made good their escape, left behind them in Mountjoy Jail have gone on hunger-strike.

The reason assigned for their action is that after Nurse Kearns’ escape a vindictive policy was instituted against them by the prison authorities, who appointed three armed Auxiliaries constantly to watch them.

The prisoners declare their determination to remain on hunger-strike until the armed guard is called off.

DEMAND FOR WITHDRAWAL OF GUARD

The recent dramatic escape from Mountjoy Jail of four women political prisoners has been followed by a hunger-strike on the part of the remaining five, against whom a vindictive policy has been in operation since their fellow-prisoners regained their freedom.

The FREEMAN’S JOURNAL is informed on absolutely reliable authority that after Nurse Linda Kearns and her three companions escaped the prison authorities caused three armed Auxiliaries constantly to watch the movements of the remaining prisoners.

At last the persecution became so unbearable that the women declined to leave their cells for exercise. The harassingly frequent use of the cell spy-holes was then resorted to, and finally the five prisoners went on hunger-strike, and have expressed their determination to persist in it until their armed Auxiliary guard is called off.